Grant Hill To The Clippers Is...Just So Weird

Returning to the Suns, joining Steve Nash with the Lakers or retiring all would be reasonable to fans. Going to the Clippers? What was Grant Hill thinking?

Share All sharing options for: Grant Hill To The Clippers Is...Just So Weird

There was pure outrage here and by a number of fans when Steve Nash asked to be traded to the Los Angeles Lakers. It was a hard pill to swallow...and it still is. Then, as if the treachery of wanting to be a Laker weren't enough, there were reports that he was actively recruiting Grant Hill, the other face of the Phoenix Suns franchise, to join him in Tinseltown and don the purple and gold, teaming up with Kobe Bryant and company and perhaps making a run at a championship.

The Suns wanted him back on the team, but apparently they didn't want to pay him much. I get that. He's old and probably not going to play the number of minutes he did last season, especially coming off of knee surgery.

Hill loves it in Phoenix, enjoys playing for Alvin Gentry (who has been his coach for 10 years of his NBA career) and was saved by Aaron Nelson and the magic of the Suns' training staff.

But on Monday when John Gambodoro tweeted that Hill was headed to LA, not to join Nash and the Lakers, but to go and play for the Clippers, I was left wondering why.

I still wonder why.

If I am Grant, I do one of three things.

One is stay put in Phoenix. Sure, they are only offering me the veteran's minimum, but money is not an issue. I love it here and I fear what may happen to my body should I leave the fountain of youth. I'm not going to win anything, but perhaps I can leave my mark on a young team that is rebuilding and get set for a post-playing career position as a member of the coaching staff or front office.

The next option is to join my good friend Steve on the Lakers. While I know the fans would hate it, I would not get the backlash. I didn't request it. I was being heavily recruited by one of my best friends. It is the bright lights of Los Angeles and I could contribute there and perhaps have a shot at a ring.

My other option is to just hang it up and retire. I'm old for an NBA player and I've had a great career. Now I can relax and enjoy the rest of my life with my family.

The Clippers are the ugly stepchild of Lala Land. They have an awful owner and a coach that nobody really knows why he has an NBA coaching job. They are decent and have young talent, and they do have Chris Paul, but they aren't going to win anything this year. Hill doesn't have, as far as I know, any good friends on the team. He has had issues in the past with Blake Griffin. It just doesn't seem to be a match at all.

On the surface, it looks like he spurned his friend and spurned the Phoenix fans.

I know that isn't really true, but look at what his decision did to Steve Nash (as shared on Instagram after the news of Hill's decision): 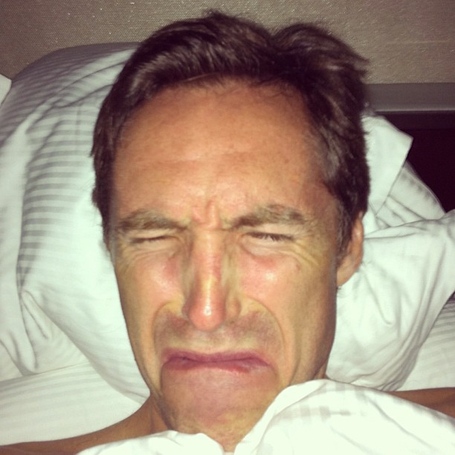 Now the details of his contract have not been reported. The Suns reportedly offered the minimum. What the Lakers were offering was never revealed, nor do I recall ever reading anything where the team actually offering.

Maybe the Clippers gave him a deal he couldn't turn down or multiple years. If the financial impact was significant, then I get it. Players gotta get paid. That's how I roll, too.

But if the money is not significantly better than what the Suns or Lakers were offering, then I'm perplexed. Maybe things will get cleared up when the Clippers introduce him to the media.

But I just can't shake this feeling about Hill's departure. Hill leaving to join the Clippers isn't sad or even infuriating. It is just...weird.

You can get more Suns coverage at Bright Side of the Sun.