Steve Nash Goes Back To The Future [PHOTO]

Share All sharing options for: Steve Nash Goes Back To The Future [PHOTO]

If you had to guess which basketball player might own a DeLorean in his basement garage, Steve Nash of the Phoenix Suns must be the guy you'd think of first, right? Timothy Burke of Deadspin reports on this possibility.

After the jump, check out the photo and judge for yourself. Also, a theory as to why Nash is time-jumping. 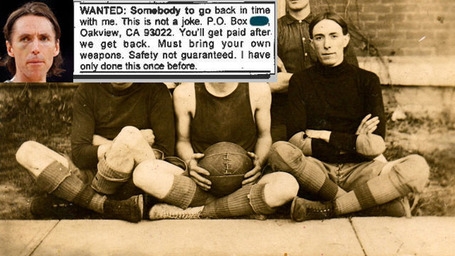 1) Nash never seems to age. Could he just be hitting the time travel machine after every game to get ready for the next one?

2) Nash should be slowing down, but he's just as strong as ever on a bad team, dishing assists galore to all. Is he really still 31 years old in age and ready to unleash a few more MVP campaign.

No one knows until they find the DeLorean.

To talk about Nash and the Suns, head on over to Bright Side of the Sun.