Steve Nash Shooting The Lights Out Among Giants (Literally)

Share All sharing options for: Steve Nash Shooting The Lights Out Among Giants (Literally)

Steve Nash has had a remarkable season so far. Those of us in Phoenix already know that and have been very spoiled over the past few years with his amazing point guard play.

He is averaging over 10 assists per game, leading the NBA. That's nothing new. He is also shooting he ball extremely well. That is no surprise either. The surprise is just how well. The image below shows where he stands among the league leaders. 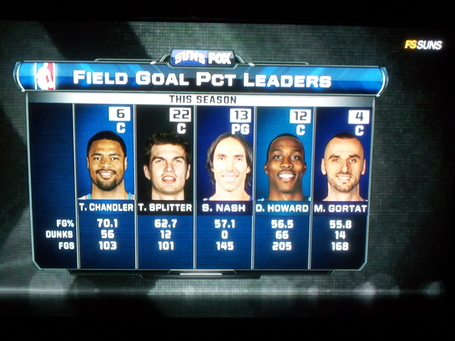 Almost without fail, centers are at the top of the leaders for field goal percentage. They usually shoot the ball right around the basket. This year's leader, Tyson Chandler has dunks on over half of his shots. Dwight Howard has about a third of his shots as dunks. Nash? Not a single dunk. His 57 percent is ridiculous for a guard, especially considering a quarter of the shots he takes are from three-point range. On two point shots, he is shooting 61 percent.

At this point, there really is very little we can be surprised about. Simply put, he is one of the best shooters the NBA has ever seen.