A couple of Phoenix Suns guards are battling injuries in training camp.

The Phoenix Suns have been bitten a bit by the injury bug early in training camp. The first issue came with Shannon Brown, who will not play in his second consecutive preseason game, according to Paul Coro of the Arizona Republic. Brown has suffered what some are calling "Halloween eye." This photo from Craig Grialous shows Brown suffered a sizable laceration above his left eye. 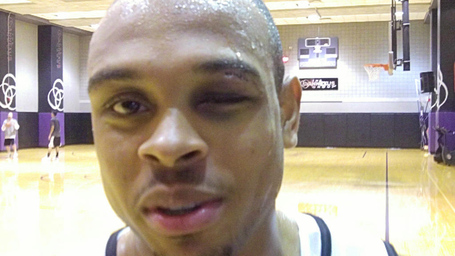 The area is pretty swollen and would certainly make it hard for the young guard to participate in drills. He could return to practice in a day or two.

The other injury issue the Suns are dealing with is Sebastian Telfair's wrist. He managed to practice on Thursday, but he was held out of Wednesday's preseason game with the Kings as a precaution. Here is the latest from Phoenix:

#Suns Telfair practiced w/his left wrist taped; he was held out of last night's gm as a precaution, should play Friday vs. Blazers