Newest Phoenix Suns forward, Markieff Morris, made his first appearance in front of the local media via conference call. He answered a few questions about his brother and previous aspirations to be a football wide receiver before his mother told him he was too tall and had to play basketball.

Like most new players coming to the Suns, Morris talked about the opportunity to play with Steve Nash.

"Just watching Steve Nash growing up and what he did with Amare (Stoudemire). Playing with a veteran point guard like him, he makes his big men good."

Morris was hailed by Suns' GM Lance Blanks for his toughness. The 13th pick in the 2011 NBA Draft explained where that toughness comes from, "My toughness comes from being from Philly. Philly guys have a different toughness from anybody you ever met and that's what I hang my hat on. I'm ready to battle with anybody."

Morris scored 34 percent of his points in post-ups according to Synergy Sports Tech. He was rated "Excellent" and converted just over 50 percent of his shots. The following chart illustrates where he is most effective in left, low block. 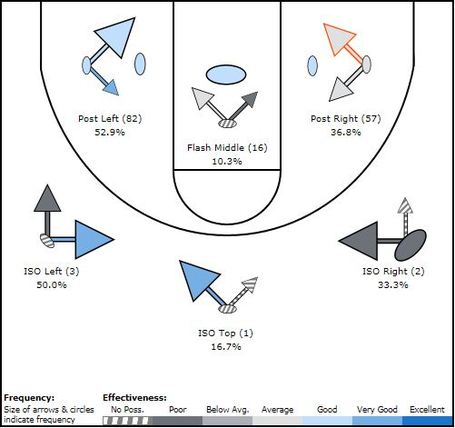 "Being that guy down in the trenches being able to do anything for the team. I've always been that guy. Being able to play with Steve (Nash) on pick and rolls and just trying to soak in all that those veteran things they got there with Steve and Grant (Hill), trying to be a professional and being the best player I can be for the team."

"Didn't really mean too much going ahead of my brother but when I heard the Suns picking me, many I wanted to cry. It's the play I've always wanted to be. It just felt so good."

"A lot of guys say I don't have an upside but we're going to see. I'm ready to put the work in and be the best possible."

Markieff Morris Gets Some Work In Before Lockout