Share All sharing options for: NBA Draft Trade Rumors: Marcin Gortat For Derrick Williams? Why Not

It's not a surprise that the Minnesota Timberwolves are shopping the number 2 pick in the 2011 NBA Draft given the Wolves roster situation with Michael Beasley and Kevin Love. From the moment the Draft Lottery was over we started reading rumors about the Wolves being open to dealing the pick. That pick is almost universally believed to be the spot that Arizona's Derrick Williams will be drafted.

The latest trade rumor from the reliable and well-connected Draft Express has the Phoenix Suns heavily in the mix to make a deal to get Williams in a Suns uniform.

A "veteran big man" can only mean one guy on either the Suns or Wizards roster and that's Marcin Gortat. The Wizards big men JaVale McGee and Andray Blatche certainly don't fit the bill. Both are talented but not nearly the mature presence that one would think the Timberwolves are looking for. 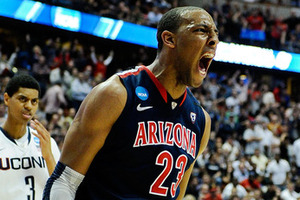 ANAHEIM, CA - MARCH 26: Derrick Williams #23 of the Arizona Wildcats reacts after a dunk against of the Connecticut Huskies during the west regional final of the 2011 NCAA men's basketball tournament at the Honda Center on March 26, 2011 in Anaheim, California. (Photo by Kevork Djansezian/Getty Images)

For the Suns, adding Williams would be a huge addition. He's not projected to be a super star but his unique abilities and competitive drive would be a great fit in Phoenix. Next to Steve Nash he would easily replace Gortat's scoring and then some. Without Nash he can still create his own offense and eventually can be a number one or number two option. Defensively and rebounding is where Gortat's loss would be felt.

As good as Marcin has been, he is still a second round talent who's shown over half a season that he can be an average to above average center in the NBA. Williams is a guy the Suns can build around for the future. He clearly can't take the team to the top -- very few players can do that -- but he can be the beginning of the future core.

Deals like this are complicated and there would likely be a player or two coming back from Minnesota to make the salaries work under the current rules and that makes it difficult to asses at this point. But if the two main parts are Marcin Gortat for Derrick Williams, I like it.