It's difficult to articulate the feeling I had while watching the remaining sixty seconds tick off the clock during Game 6 of the NBA Finals.

Disbelief. Atonement. Pride. Maybe a little bit of all three. You see, for some obscure reason, Dallas' run moved me like no non-Phoenix sporting event ever has.

It is hard to explain, but at some point during their staggering series with the Lakers, I began to realize something about the Mavericks. They were the closest thing to our beloved Phoenix Suns that was out there.

This century has not been kind to Phoenix, this we can be sure of. But what other team was there for the ride the entire time? Dallas.

What other team continually teetered on the edge of the mountaintop without tasting the sweet fruits of triumph? Dallas.

What other team simultaneously pledged to the ideals of moderate success and legendary devastation year after year, like a shell-shocked Stockholm Syndrome victim? Dallas.

We share an inexplicable kinship with our neighbors in futility.

As their magic continued, the thesis became more and more distinct. If, some day, the Suns were ever to present us with a fairy-tale run, wouldn't it have to be just like this? An aging superstar driven by years of marginalization and scorn, leading a cast of role players whose output drastically overcomes the sum of their collective parts. A team embittered by careers wrought with failure, that bands together over one final chance to overachieve at every level.

The ideal that in the age of hyper-athleticism, fundamental team ball can still persevere.

Basketball is not a game of surprises. Generally speaking, the champion can be determined from a group of three or four distinct teams at the outset of every year. As a result, when sometime truly surprising happens, the reaction will inevitably be unique.

When Golden State bested the number one seeded-Mavericks in 2007, the collective delight was palpable throughout the country. Conversely, when the Grizzlies destroyed the Spurs in this year's first round, a peculiar tone of acceptance echoed from everyone's lips, ‘Well, yeah, they're just the better team.'

But this? This was something different.

The past few months have had an indescribably bizarre, ultra-surrealistic sheen permeating around them. The journey between ‘it wasn't going to happen' to ‘it couldn't happen' to ‘it may happen' to ‘it will happen' was incomparable to anything in the history of the sport. And really, the look on Dirk Nowitzki's face as he sat on that podium in South Beach said it all. 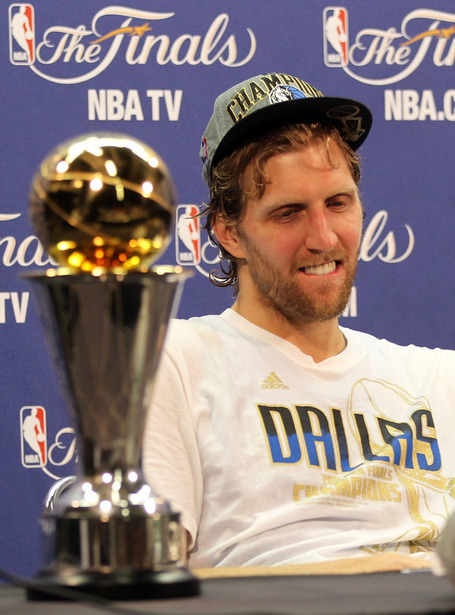 The stories were already written for this group. Dirk, Kidd, Marion, Terry; they were supposed to join the never-made-it's. Forever doomed to watch those wretched lists roll by like the cool summer breeze, marginalizing a lifetime of blood, sweat, and tears. A career of individual accomplishment, only to be eternally prefaced with, ‘Well, he never won it all'.

But two dreamlike months later, everything has changed. The trajectory of each of these men's lives has distorted so unexpectedly that even those involved don't yet understand it.

"I still can't really believe it," Dirk said over and over, as the stark realization overpowered him over like the brazen flicker of candle nearing the end of its wick.

I fully understand -- and mostly agree with -- the sentiments of my colleague, and fellow tortured Suns-soul Scott Howard. When you are among the few left in a specific, reserved circle of misery, appreciating its shrinkage is a wearying request.

Yet, somehow this magnificent spectacle lends me hope. It's the truest embodiment of the cliché magic of sports. No matter what you think you know, no matter how beaten down you get, eventually something absurd will come along and renew the shivering faith.

When it comes down to it, that's why this series meant so much. In these times of Lakers/Heat big-market-dominance, what point is there to stay without the existence of the tiniest shard of hope. The unbridled idealist within me needs table scraps like this to keep everything going.

Living vicariously alongside these warriors for the past few months reaffirmed that certain ineludible love of sports within my spirit; the one that slowly chips away after continual, immeasurable heartbreak.

Truly, it doesn't matter how many times the overdog steps over the underdog, as long as that last sliver survives, defiantly whispering, ‘anything is possible'.

And that makes it all worth it.