Yesterday the Mavericks sealed what I think is one of the more surprising NBA Finals results of my lifetime (I'd still put it behind Detroit's mastery of the Lakers in 2004). After losing Game 1 and trailing by as many as 15 in the fourth quarter of Game 2 it appeared Dallas was going to be nothing more than a foil for the coronation of Miami's Big 3. From that point forward the Mavericks rallied to win Game 2 while the Heat would claim just one more game - game, set, title. 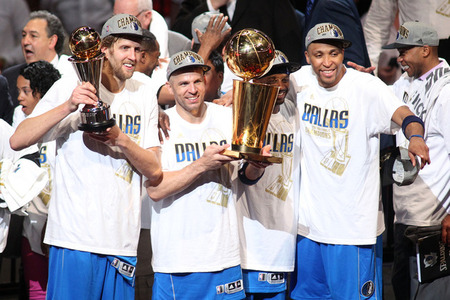 The championship was the first for Dallas since they entered the NBA as an expansion team in 1980. It's also allowed the Mavericks to escape a dubious club - that of NBA teams to never claim the championship. Of the NBA's 30 teams a grand total of 12 have failed to win it all - sorry Indiana I'm not counting your ABA crowns. Out of those 12, only 6 have been around more than 21 seasons (Minnesota, New Orleans, Orlando, Toronto, Memphis, and Charlotte are getting a pass).

That leaves 6 franchises who have been around a while and failed to hoist the big prize. Those 6 franchises and their birth years?

In case you have trouble reading bullet points and interpreting years I'll break it down all easy for you - the Suns are the franchise that has been around the longest without winning the NBA championship. Sure they've at least been to the Finals unlike the Clippers or Nuggets and have had a real shot to win when they got there unlike the Cavs (2007 sweep at the hands of San Antonio) but it's still been pure title futility for years.

In 43 seasons the Suns have trotted out serious contenders on many different occasions - they've even won 50 games or more 19 times - but they've never finished the job. I typically try to live in ignorance of this fact but when a former member of our shameful club wins the title like the Mavericks did then the misery is brought into focus.

Misery loves company and the bitter asshole in me wanted Dallas to continue to share that misery until I no longer had to. Does that make me a jerk? Absolutely. And that's probably why I rooted for the Heat.