Before we get into the NBA Playoffs schedule for this fine Monday that features the Memphis Grizzlies, Oklahoma City Thunder, Miami Heat and Boston Celtics, let us take a moment to reflect on the sweep the Dallas Mavericks dropped on the Los Angeles Lakers. Not only did Dirk Nowitzki's Texas cowboys beat down Kobe Bryant's hated team in Phil Jackson's final playoff series, but the Lakers imploded and embarrassed themselves and their bandwagon fans with a series of cheap fouls.

Andrew Bynum should be suspended for five games to start the next season but won't mind of course, because he's never ready to start the season anyway due to knee issues. Who knows why Lamar Odom channeled his inner Robert Horry and body checked Dirk late in the game but there must be Kardashian involvement. We've now seen both the top-seeded Spurs go down in first round defeat to the eight seed and the Lakers swept out of the second round. Could these playoffs be going any better?

When you think of cheap plays, you normally think of the Boston Celtics. But they come out of the weekend looking heroic after the beat the Miami Heat in Game 3 on Saturday. Rajon Rondo coming back after his gruesome elbow injury was inspiring but it was Kevin Garnett and Paul Pierce that did a number of LeBron and Wade.

It still felt, however, more like the Heat were in one of their "too cool for school" modes and didn't give a playoff effort. I would expect LeBron James and Dwyane Wade to have that Heat team ready to play and win Game 4. The action starts at 7:00 p.m. ET / 4:00 p.m. PT on TNT (video preview via NBA.com).

Monday's NBA Playoff schedule also returns us to Memphis, the scene of this weekend's Grizzlies attack on Kevin Durant and Russell Westbrook. Those young Thunder managed to blow a 16-point lead when Westbrook channeled his inner Derrick Rose and stopped passing the ball.

The Thunder scored just 10 points in the fourth quarter and lost in OT. As good as Memphis is, that shouldn't happen. But no matter how good you are, no point guard can go one-on-five in the playoffs and except to win. Derrick Rose tried that mess again (12-32) and his Bulls lost to the Hawks. 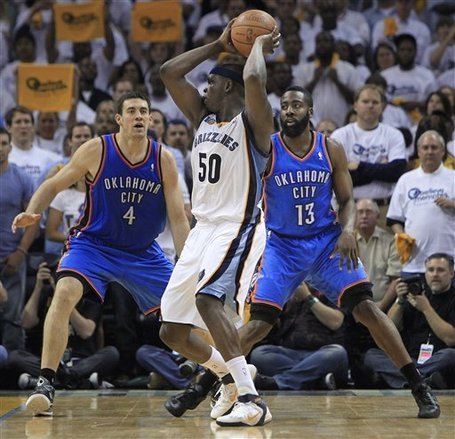 Memphis Grizzlies forward Zach Randolph (50) is defended by Oklahoma City Thunder forward Nick Collison (4) and James Harden (13) during the overtime period of Game 3 in a second-round NBA basketball series on Saturday, May 7, 2011, in Memphis, Tenn. Randolph led the Grizzlies with 21 points as they won 101-93 in overtime to take a 2-1 lead in the series. (AP Photo/Mark Humphrey)