Happy Mothers Day to all the mothers out there. But since 90 percent of our readers are of the male variety, here's wishing you fellas a Sunday filled with NBA Playoffs. We hope you are able to finish your obligations to mom and/or wife and get yourself where you belong, in front of the TV. It's time to see if Dirk Nowitzki and the Dallas Mavericks can sweep the Los Angeles Lakers and to find out if Derrick Rose can follow up his 44-point Game 3 performance when the Bulls take on the Hawks.

It might be a bit tricky for West Coast peeps if you have brunch plans with mom since Game 4 of the Mavericks vs. Lakers starts at 3:30 p.m. ET / 12:30 p.m. PT on ABC. Fortunately, Shawn Marion and Dirk Nowitzki will have a good excuse to ditch their duties and show up to play ball. At this point the only thing the Lakers can hope to do to stop Dirk is beg his mom to keep him out of the game. They've had no answer for Nowitzki in this series and Kobe's allowed himself to be slowed by Jason Kidd.

The question for the Lakers is Pau Gasol, Ron Artest and Lamar Odom who've seem to have lost their chemistry and mojo. The Lakers remain confident, however, as assistant coach Brian Shaw pointed out, "No team in these playoffs can beat us four times before we beat them four times. I still believe that. "

Derrick Rose had his best game of the 2011 NBA Playoffs in their last meeting. Rose put up 44 points and shot 59 percent from the field. That's after averaging under 40 percent for the entire playoffs and being a black hole on offense. I would still like to see Rose get more of his team involved and attack the Hawks with the pick and roll. 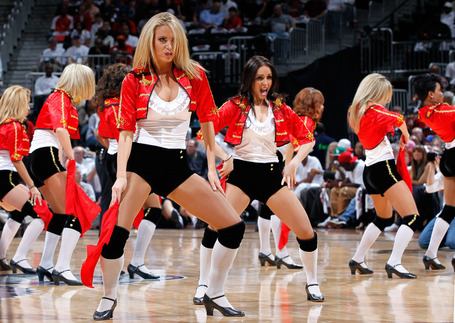 ATLANTA, GA: The Atlanta Hawks cheerleaders perform during Game Three of the Eastern Conference Semifinals in the 2011 NBA Playoffs against the Chicago Bulls at Phillips Arena in Atlanta, Georgia. (Photo by Kevin C. Cox/Getty Images)