The 2011 NBA Playoff schedule for Saturday features a couple of Game 3 dandies. The Boston Celtics are down 0-2 to the Miami Heat and desperately want to avoid the shame the Lakers feel after losing to the Mavericks going down three games to none. The OKC Thunder and Memphis Grizzlies are tied up at one all and the Thunder think they've solved Zach Randolph...we'll see about that.

5:00 p.m. ET / 2:00 p.m. PT on ESPN is the start time for Game 3 of the best series in the 2011 NBA Playoffs. The Memphis Grizzlies will be hosting the Oklahoma City Thunder with the series tied 1-1 after the Grizzlies split on the road. The Thunder think they found an answer for Zach Randolph in Game 2 by squeezing him hard and bringing help when he put the floor on the deck. But Kevin Durant's Thunder also needed a 57.1 percent three-point shooting effort to get the win. Expect the Grizzlies defense to tighten up at home and win this game.

Game 3 of the Boston Celtics vs. Miami Heat fires off at 8:00 p.m. ET / 5: p.m. PT on ABC. Shaq might be back for the Celtics but they are going to need more than the Big Green Monster to slow down LeBron James and Dywane Wade. Wade and James rolled through the elderly Celtics defense in the first two games of the series and took a 2-0 lead by winning both at home.  The Celtics are (were?) a prideful team and should be able to pull out a Game 3 win. 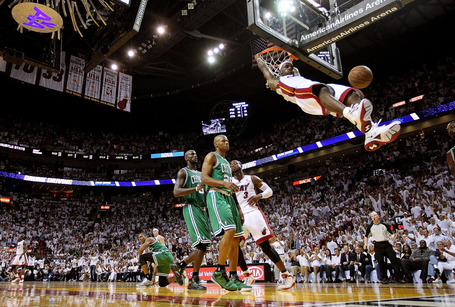 MIAMI, FL - MAY 03: LeBron James #6 of the Miami Heat dunks over Ray Allen #20 and Kevin Garnett #5 of the Boston Celtics during Game Two of the Eastern Conference Semifinals of the 2011 NBA Playoffs at American Airlines Arena on May 3, 2011 in Miami, Florida. (Photo by Mike Ehrmann/Getty Images)