Friday night in the NBA Playoffs featured what could be considered a changing of the guard. It was Derrick Rose who was jacking up shots and putting up big numbers while Kobe Bryant was sharing the ball but unable to close the deal in the fourth quarter.

The Los Angeles Lakers fell to 0-3 against the Dallas Mavericks after blowing a seven-point lead with under five minutes left in the game. Last season in the playoffs Kobe was able to rise up and hit those shots needed to win the game. It didn't matter who was defending him or how well, he just made shots when it mattered. Kobe had a nice line of 8-16 for 17 points but was just 2-6 in the fourth quarter of a do-or-die game.

On the other side, it was Dirk Nowitzki who has taken over as the best player in the 2011 NBA Playoffs. Dirk was his unstoppable scoring self (32 points, 12-19) but added nine rebounds and an undeniable floor leadership and passion to his game. Gone is the silent German shooter. This Dirk is a stone cold killer who's desire to win is infectious to his Mavericks teammates.

Derrick Rose was the hero of Friday's NBA Playoff games with a fantastic 44-point performance against the Atlanta Hawks. He shot 59 percent from the field and got to the free throw line (8-9). It's odd though, to hear Rose described as "aggressive" by his coach since he's taken 27 shots in all three games of this series. The difference Friday was his shot was falling. If you are going to be a hero for taking and making a ton of shots you should be a goat for taking and missing a ton of shots which is what he's done in the postseason up to this game.

In the end, it was the Bulls perimeter defense and rebounding that made the defense in their win over the Hawks. Atlanta shot 47.1 percent from the field but were just 1-6 from the three-point line and scored just 82 points in the loss. 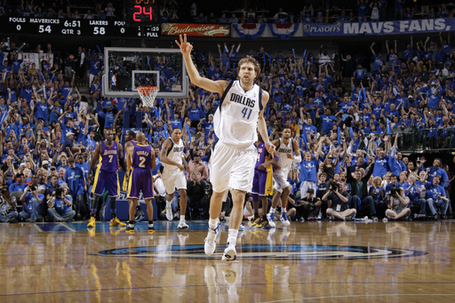 DALLAS, TX - MAY 6: Dirk Nowitzki #41 of the Dallas Mavericks reacts after hitting a three against the Los Angeles Lakers in Game Three of the Western Conference Semifinals during the 2011 NBA Playoffs on May 6, 2011 at the American Airlines Center in Dallas, Texas. (Photo by Danny Bollinger/NBAE via Getty Images)