Share All sharing options for: Derrick Rose Volume Shooting Pays Off In Bulls Win Over Hawks

Derrick Rose was averaging over 22 shots per game in the 2011 NBA Playoffs going into Friday night's Game 3 and was hitting on under 40 percent of his attempts. That's not a recipe for playoff success in the NBA and is a big reason why the Chicago Bulls were tied in their series with the Atlanta Hawks and why the Bulls were pushed hard by the Pacers.

However, if Rose is going to 16-27 from the field (59.3 percent) and score a game-high 44 points then the Bulls are virtually unstoppable. They rolled through the Atlanta Hawks 99-82 behind Rose's hot shooting and the Bulls customary defense to take a 2-1 series lead.

The real question for Chicago is if they are better off hoping Rose will have a good shooting game each night versus trying to get more of their players involved in the offense. If the Bulls are going to advance to the NBA Finals they will have to go through either the Boston Celtics or Miami Heat. Those teams are too good defensively to let one player beat them in a playoff series. It would be a really good time for Chicago to start sharing the ball.

A 44-point game is great and Rose is a fantastic talent, but unless this performance was the start of a trend that has him shooting at a respectable rate it does not bode well for the Bulls chances in the next round. 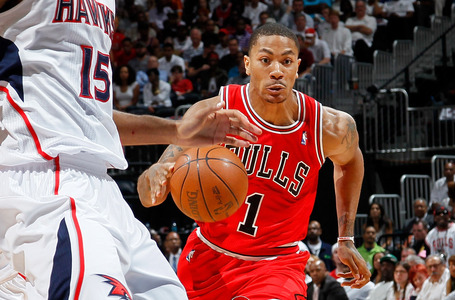 ATLANTA, GA - MAY 06: Derrick Rose #1 of the Chicago Bulls drives against Al Horford #15 of the Atlanta Hawks in Game Three of the Eastern Conference Semifinals in the 2011 NBA Playoffs at Phillips Arena on May 6, 2011 in Atlanta, Georgia. (Photo by Kevin C. Cox/Getty Images)