The NBA doesn't hold formal "Combine" like the NFL does but this weekend (May 7 and May 8) in New Jersey will be the closest thing to it. 44 candidates for the NBA Draft will gather at a facility and spend two days being poked, prodded, measured and most importantly, observed in five-on-five play.

The players invited to this mass work out are almost all potential second round picks or prospects destined to try and make and a NBA summer league or training camp roster as free agents. This mass workout is not for the projected first round picks who have been better scouted and will be invited by specific teams to work out in private sessions that are limited to six players at a time.

For those players with remaining college eligibility, it's their last opportunity to decide if they want to declare for the 2011 NBA Draft or return to school. The early May 8 NCAA deadline doesn't give these kids much chance to test the waters by working out for NBA teams and getting feedback. Next year, the deadline is even worse -- by mid April "student athletes" will either have to declare for the draft or return to school. The NCAA rules are all designed to help college coaches and in the process make life very difficult for the players.

This year at least, these players who are on the bubble of being drafted will get the chance to play five-on-five against their peers and get some feedback from the NBA scouts and front office executives that attend.

The Phoenix Suns are sending their Director of Player Personnel, John Treloar to check out the talent. Phoenix doesn't have a second round pick in the 2011 NBA Draft but you never know how that might change.

There are no Arizona or Arizona State players on the list of 44 invitees. Isaiah Thomas and his Washington teammate Justin Holliday will participate. Arizona fans know all about Thomas from the Pac-10 Finals game. 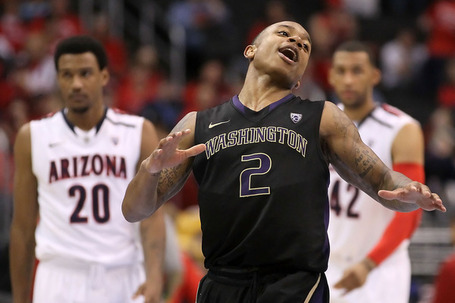 LOS ANGELES, CA - MARCH 12: Isaiah Thomas #2 of the Washington Huskies reacts in overtime while taking on the Arizona Wildcats in the championship game of the 2011 Pacific Life Pac-10 Men's Basketball Tournament at Staples Center on March 12, 2011 in Los Angeles, California. The Huskies defeated the Wildcats 77-75 in overtime. (Photo by Jeff Gross/Getty Images)