The 2011 NBA Playoffs get back in action on Friday after the schedule gave us a much needed rest day. It was good to step back and clear the mind and it also gave us a chance to reflect and reveille in the dysfunctional mess that is the Los Angeles Lakers. With Ron Artest suspended and the entire team reacting to Andrew Bynum's trust issues, it certainly feels like Kobe Bryant and Phil Jackson are losing their grasp on the defending champs. Don't think for a moment that in Arizona we're not watching that with a gleeful grin.

The Atlanta Hawks managed to steal a game in Chicago and bring the series home tied 1-1 with the Bulls. In the process of those first two games, Chicago's path to winning this series has become painfully obvious. They can't let the Hawks perimeter shooters get or stay hot. The only way the ATL beats the Bulls is if they rain down fire from the outside.

Offensively, Derrick Rose will continue his ball and shot domination which really is a shame. With the talent on that team, they really should be able to field a much more dynamic offensive attack. But rebounding and defense is what got the Bulls the best record in the regular season and they are not going to change that up now. They just better hope that if Rose is going to take 27 shots per game that he's making more than 10 of them. Allen Iverson got his team to the Finals using a similar strategy but the Bulls won't beat their next opponent shooting under 40 percent from the field. Game 3 is scheduled for Friday at 7:00 p.m. ET / 4:00 p.m. on ESPN.

Lakers internal drama aside, Friday night is our chance to see if the Mavericks can keep on rolling. They deserve as much credit for taking two road games as the Lakers deserve blame for losing them. But don't think that in the back of everyone's mind there's not an expectation that Kobe will find a way to jaw-thrust his way to a win. Cornered animals don't react well and Friday is do-or-die time for the Lakers playoff hopes. Friday's game is at 9:30 p.m. ET / 6:30 p.m. PT on ESPN. 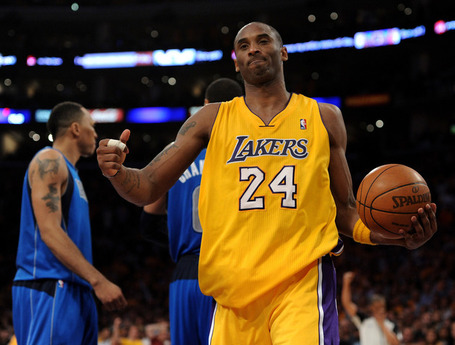 LOS ANGELES, CA - MAY 02: Kobe Bryant #24 of the Los Angeles Lakers reacts late in the fourth quarter while taking on the Dallas Mavericks in Game One of the Western Conference Semifinals in the 2011 NBA Playoffs at Staples Center on May 2, 2011 in Los Angeles, California. The Mavericks defeated the Lakers 96-94. (Photo by Harry How/Getty Images)