Even Dirk Nowitzki needs a day off and Thursday is the designated day of rest for the 2011 NBA Playoffs. The second round has been interesting and full of surprises so far so let's take this day off to look back and reflect on the four series and make sure we've got the schedule for the rest of playoffs down pat so we don't miss anything.

This series is tied 1-1 after the Memphis Grizzlies went in and shocked many people with their Game 1 win in Oklahoma City. The Thunder fired back in Game 2 with a tighter defensive plan on Zach Randolph and 57 percent shooting from three.

The Dallas Mavericks punched the Lakers in the mouth hard and took two games in Los Angeles. Dirk has been the best player in the second round of the playoffs and the Mavs defense has been solid and the role players outstanding. Kobe's been Kobe but Pau Gasol is a ghost and Ron Artest a flat out distraction.

As painful as it is to say, the Miami Heat look like the strongest team in the NBA Playoffs. They put a beat down on the Celtics in the first two games in Miami and the new LeBron is setting picks and even playing in the post a bit more. Boston is beat up with Rajon Rondo dealing with back problems and Paul Pierce his annual foot/ankle/knee thing.

The Bulls defense was lacking in the first game and their offense isn't good enough to out-score teams. In game two, Coach Thib's boys locked down the perimeter and held the Hawks to 33 percent shooting. The series is tied 1-1 heading back to the ATL. 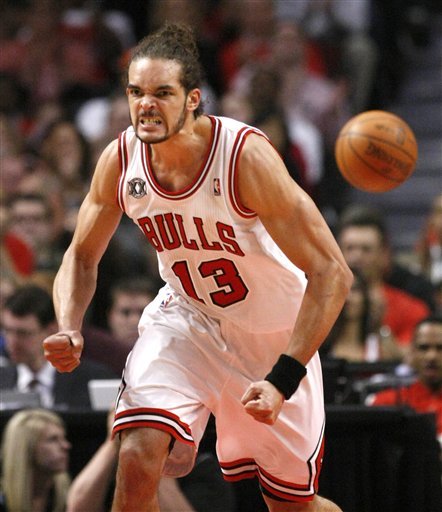 Chicago Bulls center Joakim Noah reacts after a dunk during the fourth quarter in Game 2 of the NBA Eastern Conference semifinal series against the Atlanta Hawks Wednesday, May 4, 2011, in Chicago. The Bulls won 86-73 with Noah scoring 19 points. (AP Photo/Charles Rex Arbogast)