NBA Playoffs: Bulls Do It With 'D', Rose Still Jacking Away

Share All sharing options for: NBA Playoffs: Bulls Do It With 'D', Rose Still Jacking Away

The Chicago Bulls evened their NBA Playoff series with the Atlanta Hawks using the same formula that got them the best record in the NBA this season. They did it with defense and rebounding and just enough inefficient scoring from Derrick Rose. Rose, as he's done all postseason, took a ton of shots and missed far more than he made. Normally, that kind of volume shooting from a point guard is considered selfish, but the Bulls team defense and interior play once again covered the MVP's flawed game.

Time and time, Rose drove past his man and into help defense or simply pulled up in space against defenders that were sagged off. Rose, having all the reason in the world to be even more confident in his abilities, simply jacked up one shot after another. He went 10-27 from the field and scored 25 points. It's never a good sign when a player has fewer points than shot attempts.

Looking at all of Rose's shots in this game, he missed seven three-point attempts, three mid-range pull-up J's, and six times he drove into traffic and tossed up a hook shot or floater of some kind. Seven of the eight threes Rose took were shots taken against defenders who sagged off and gave him the space to fire away. One was a kick out from Boozer who was double teamed.

Derrick did have 10 assists in the game. Four came on pick and rolls, two were in transition off a rebound or steal, one was an entry pass to Boozer who sealed his man down low, one was a bail out three by Noah at the end of the clock and one was a pass to Deng cutting off a screen that shouldn't have been counted as an assist.

On the other end of the floor is where the Bulls shine. Under Coach of the Year and defensive mastermind Tom Thibodeau, Chicago did what they failed to do in Game 1 and locked down Joe Johnson and Jamal Crawford. The combo lit up the Bulls in Game 1 for 56 points and 7-9 from three.

In Game 2 the Bulls extended their perimeter defense and held Johnson and Crawford to just 2-5 from three and 27 points. The only Hawk player to have a good offensive game was Rose's opposite point guard, Jeff Teague who shot 50 percent and had 21 points. Half of Teague's shots came with Rose guarding him.

The Bulls defense is good enough to beat the Hawks in this series, but this Chicago team won't advance further with Rose playing an Allen Iverson-type selfish game. The Bulls shot just 39.3 percent in this game but out-rebounded the Hawks 58-39 and held Atlanta to just 33.8 percent from the field. If Atlanta can hold the Bulls to under 40 percent shooting, the Miami Heat will tear right through this Bulls team. 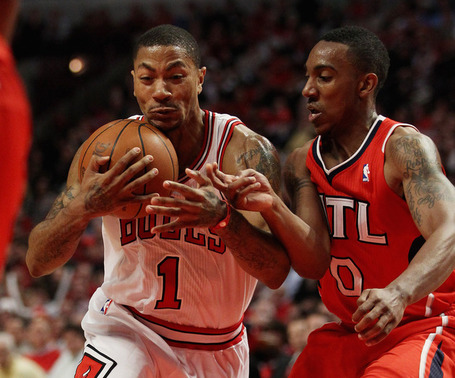