The newest playoff hero to NBA fans isn't Derrick Rose or Kevin Durant. The new king of the postseason is the guy who's been called "soft" and "choker" and now has waltzed into Los Angeles and delivered a hard core shocker to the Lakers and their fine fans. All Dirk Nowitzki has done in two playoff games is out-played his opposite power forward, Pau Gasol, and dominated Kobe Bryant in the battle for best player in the series.

Dirk is up on Gasol in both points and rebounds with a two-game total of 52 points and 21 rebounds versus just 28 points and 20 rebounds for the Lakers Spanish star. More importantly, Nowitzki is shooting 52.6 percent from the field in the first two games of the playoff series while Gasol (45.5) and Bryant (46.9) are lagging behind.

Much of the focus on this shocking development is on the Lakers which is understandable since we all (myself included) expected Kobe's team to once again flip the switch and roll through the Mavericks in convincing fashion. The Lakers certainly have their issues. Andrew Bynum said something vague about "trust" issues and Ron Artest lost his marbles and most likely earned a suspension for this late game hit on J.J. Barea.

Not enough credit, however, is given to the Mavericks' role players. Tyson Chandler has negated much of Bynum's impact and Shawn Marion and J.J. Barea have stepped up as part of the Mavericks' bench advantage and was the difference-maker in the fourth quarter of Game 2.

The Lakers shot 2-20 from three-point range in Game 2 which was a huge factor as well. Having watched clips of all 20 of those shots, I counted 12 that were good, open looks that came within the offense. Drive and kicks or double teams down low where the ball was passed out and a Laker simply missed a good shot. And of the eight "bad" shots, four came within the finals minutes once the game was well out of reach. The Lakers weren't settling or taking forced shots. They took what the defense gave them and the right people took good shots...and missed.

The Mavericks essentially employed the same game plan that that Suns' used against the Lakers in the Western Conference Finals last season when they packed the paint and double-teamed the post and forced Kobe and Artest to win games from the perimeter.

Last year the Lakers stepped up and hit those shots, so far this year they haven't. When good shooters are missing open shots, that's normally an energy and focus issue. We'll find out on Friday if that's something Phil Jackson is able to sort out. 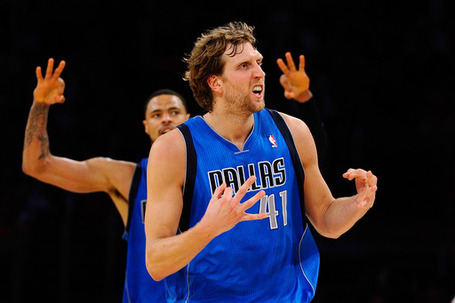