Forget The Celtics, LeBron And Wade Beat Durant And Westbrook For Best Duo

Share All sharing options for: Forget The Celtics, LeBron And Wade Beat Durant And Westbrook For Best Duo

There's a tendency in the NBA media and with fans to gloom on to the new thing. That's how Derrick Rose won the 2010-11 MVP Award instead of Dwight Howard and it's why Kevin Durant and Russell Westbrook have become the new darling children of the 2011 NBA Playoffs. But there's something to be said for experience and let's also not forget that on the hierarchy of NBA talent LeBron James and Dwyane Wade are still at the top of the mountain.

There's plenty of reasons to despise LeBron James for his "Decision" to "take his talents to South Beach" and play second fiddle to Dwyane Wade. But if you can look past all that and simply watch the game it's impossible not to be amazed by the damage these two can do on the court.

Kevin Durant and Russell Westbrook on the other hand, have a lot of years left in front of them and especially in the case of Westbrook, a lot more basketball to learn. There may come a time in three or six years when Durant and Westbrook pass James and Wade as the best duo on the court, but for now it's not even close. 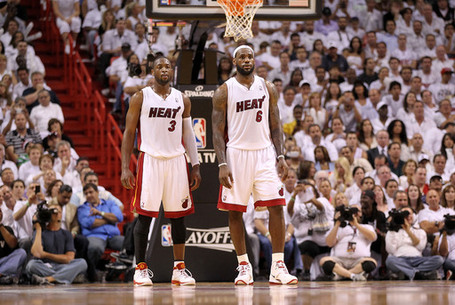 On Tuesday night in NBA Playoff action both the Miami Heat and Oklahoma City Thunder won their Game 2 home contests. James and Wade combined for 63 points, fives assists and 15 rebounds against a Boston Celtics team many people picked to win a ring this year. Durant and Westbrook totaled 50 points, seven assists and seven rebounds against the Memphis Grizzlies who many assumed would be home fishing by now.

The most important distinction between the two pairs of NBA stars was efficiency. Durant and Westbrook shot 17-48 (35.4%) versus 22-45 (48.9%) for James and Wade. It was just one game but it's a pretty telling reason why the Heat will advance to the conference finals while the Thunder are going to struggle to beat an eighth-seeded team missing one of their top players.

Hopefully folks can put the Heat hate aside long enough to appreciate the LeBron and Wade show. Special talents like this rarely take the floor together outside of All-Star games.