Derrick Rose, by all reports, will win the MVP award for the 2010-11 NBA season. Rose, 22, will be the youngest winner of the award and in the opinion of this writer, the worst choice since Steve Nash won the MVP for the 2005-06 season. For an Arizona writer who's watched Nash his entire time in Phoenix that is a high degree of blasphemy, but it is what it is. Nash's second MVP, at least, was justified by his prior playoff success and the poor competition for the award that season. There's no such excuse for Rose winning MVP in the 2010-11 season.

When Nash won his second MVP for leading the Phoenix Suns to a 54-win season with Amare Stoudemire on the shelf recovering from micro-fracture surgery, the league was still in awe of the Seven Seconds or Less Suns. Nash's team that year, however, wasn't the best offense and certainly wasn't the best defense.

The Dallas Mavericks had more wins that year (60) and at 111.8 points per possession were the best offensive team. The San Antonio Spurs had the best defensive team and won 63 games. Dirk Nowitzki (25.1 points, 8.5 rebounds) or Tim Duncan (18.6 points, 11 rebounds) were both better choices that season although both were clearly flawed picks as well.

Nash won the MVP on the strength of leading the Suns to a shocking Western Conference Finals appearance the season prior and for turning Boris Diaw into a legit NBA threat (a feat even more remarkable with the benefit of hindsight). 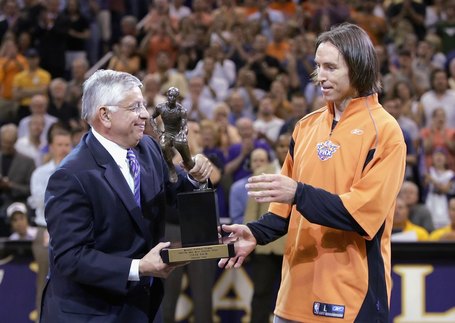 Derrick Rose winning the MVP award for the 2010-11 NBA season is an even worse pick than Nash. Yes, he's an amazing individual player and as unstoppable as any guard we've seen with the ball in his hands in years. The Bulls finished the season with the best record in the NBA but that's where it stops. Unlike Dwight Howard, Rose doesn't dominate both ends of the floor and unlike Kobe Bryant or LeBron James, Rose hasn't done it in the playoffs (yet) and still has a one dimensional game.

Rose was the flashy choice and the easy choice but also a poor choice. Momentum started to build for Rose and his highlight reel plays reinforced his legend. Basketball, however, is a still a team game and for a 22-year-old point guard with the seventh-best assist rate in the league and the ninth-best Player Efficiency Rating to win the MVP is a mistake.