The 2011 NBA Playoffs have been nothing if not surprising. Monday's schedule showed us again that being a favorite with home court advantage means little if your team gets overconfident and too enamored with your press clippings. The Chicago Bulls got whooped by Jason Collins' Atlanta Hawks and the Los Angeles Lakers built a big lead against Dirk Nowitzki's Dallas Mavericks only to start the celebration too early and earn the loss. Three out of the four higher-seeded home teams have now lost their Round 2, Game 1 games.

The playoff schedule resumes Tuesday with the Miami Heat facing the Boston Celtics in a game that's far more about Shaq returning to the court than anything LeBron James or Dwyane Wade might do. Just kidding, Shaq isn't going to make a lick of difference in this game. The Oklahoma City Thunder, meanwhile, will find out if they've got an answer to the best story of the 2011 NBA Playoffs -- Zach Randolph of the Memphis Grizzlies. 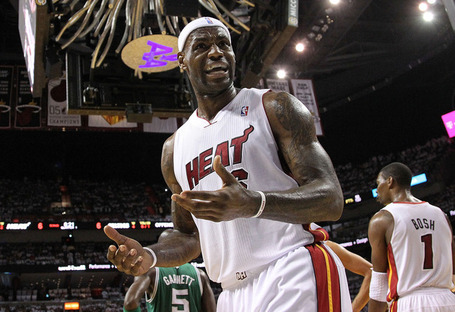 LeBron James has quietly been the best player in the playoffs (now that Chris Paul is home) and the Heat are playing the best playoff ball in the East. This game is all about the Celtics responding like champs instead of folding like chumps as they did in Game 1. Paul Pierce, we are talking about you.

The Thunder are not going to have an answer for Marc Gasol and Zach Randolph in the paint, but to win they are going to need more offense from Serge Ibaka to make Zach defend at bit. Most importantly, Russell Westbrook needs to wake up and realize that his job on the floor is the distribute the ball and run the team and not to try and match Derrick Rose's shot attempts and point totals. Don't sleep on the Grizzlies bench though, they've been awesome.