The 2011 NBA Draft is filled with high-risk, high-reward international prospects. They are all big and they are mostly all skilled. They also come with big question marks. Czech small forward Jan Vesely -- not so small at 6-11 -- was once a late lottery prospect but has climbed steadily up the mock draft boards based on his defense and competitive fire. Donatas Montiejunas of Lithuania was once considered a top five pick but has slide steadily down the rankings for the exact opposite reasons that Vesely climbed -- lack of defense and questions about his intensity.

Montiejunas is a 7-foot skilled big who draws comparisons to Andrea Bargnani and even Pau Gasol but he also is thought by some to be the next Yi Jianlian.

For the Phoenix Suns to take Montiejunas with the 13th pick in the 2011 NBA Draft would be a huge gamble. He would essentially be the inverse of Earl Clark who was drafted with questions about his offense but thought to be a top defensive prospect.

NBA European Draft Prospects: Donatas Motiejunas | NetScouts Basketball
Motiejunas is a legit scoring presence down low that owns a skilled post game, can stretch the floor with his deep shooting range and is capable of putting the ball on the floor and drive his way to the basket. The fact that he’s left-handed also gives him an edge. All of that while standing at seven-feet tall.

Like most 20 year-olds, Motiejunas doesn’t show much interest in playing defense. His lack of upper-body strength and physical play already puts him in a disadvantage but his disinterest makes things worse. He’s a poor rebounder, kind of absurd for somebody with his length (6-foot-11-inches wingspan), and a poor defender overall.

Montiejunas has bounced all over the mock draft boards for the past year or so. Chad Ford has him falling to the Blazers at 21 and Draft Express has him going 12th to the Jazz. SB Nation has the Suns taking him and you could see where he would be a nice complement to Channing Frye off the bench.

The Suns second unit struggled without Frye's ability to space the floor and offensively, Montiejunas is essentially a Frye clone but with more upside as a post scorer. Frye was also a player once considered "soft" and a defensive liability but with time he's improved that part of his game.

For the Suns to take Montiejunas, they would have to be impressed with his character and desire and believe that with time the 20-year-old could develop enough to handle the physical part of the NBA game. On the flip side, if you are going to draft bench scoring and have the choice between the outside shooting Jimmer Fredette and a guy who can both shoot and score in the post, why not got with the seven-footer.

Bright Side of the Sun explains why the Suns, even in a "bad" draft, can find value with the 13th pick.

2011 NBA Draft: Don't Expect Miracles, But A Rotation Player Can Be Had - Bright Side Of The Sun
This draft IS weak. Let's assume for the purposes of this article that the Suns' #13 pick is the equivalent of a #19 pick in any other year. Six of the top college players have decided to return to school rather than face the uncertainty of a year without basketball: Harrison Barnes, Jared Sullinger, Perry Jones, Terrence Jones, Tyler Zeller and Nikola Mirotic would all have most likely been lottery picks (top 14).

So, the Suns are picking the equivalent of latter-third talent in round 1. Can the Suns still get a good player? Of course. Every year there are a few solid starters drafted outside the top 15 picks, though rarely all-stars. Let's just review the past few years, look at some trends amongst the most successful later picks and then see where to go from there. 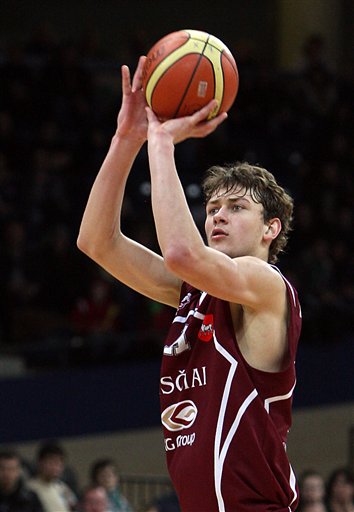 FILE - In this photo taken Jan. 24, 2009, Lithuanian basketball player Donatas Motiejunas is shown in action in Kaunas, Lithuania. Montiejunas is expected to be picked in the 2010 NBA Draft. (AP Photo/Mindaugas Kulbis)