LeBron James And Derrick Rose Playoffs Most Over And Underrated Stars

Share All sharing options for: LeBron James And Derrick Rose Playoffs Most Over And Underrated Stars

It's odd to think of either LeBron James or Derrick Rose as underrated although there are some who might make the case that either is overrated. The reality is that James, for all the hate he earned the old fashion way (being an ass off the court), is continuing to develop his game and in his eighth year as a pro finally looks like a mature basketball player. Rose is as flashy as they come and has carried his team to three playoff wins with his talent, but there are some holes in his game that get easily overlooked in favor of his shiny newness. 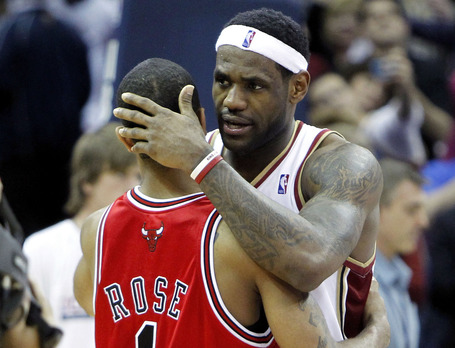 LeBron James talks with Derrick Rose of the Chicago Bulls after defeating the Bulls 96-94 in Game Five of the 2010 Eastern Conference Quarterfinals in Cleveland, Ohio. (Photo by Gregory Shamus/Getty Images)

LeBron James has seen his numbers decline through six playoff games with the Heat compared to his years in Cleveland but that's to be expected now that he's playing with a better supporting cast. Like other great NBA stars before him, LeBron has evolved his game from being the focal point of the entire team to being part of the unit. Kevin Garnett did it when he went to Boston and won a ring. Kobe Bryant does it with his teammates before he forgets about it and then eventually does it again.

We are seeing a different LeBron now who's not taking the most shots on his team and yet is still the most dynamic player on the court every night. James' post up game, long a source of criticism, has improved as well. In the 2011 NBA Playoffs he's posting up 10.4 percent of the time and converting 66.7 percent of his attempts according to Synergy Sports Tech data. Defensively, he held Paul Pierce in check in Game 1 of the Boston series and is the only player in the last five years to average over 23 points, six assists and nine rebounds per game in the playoffs.

Hate him all you want, LeJames is still The King but has somehow become underrated.

Derrick Rose on the other hand, is looking an awful lot like LeBron James in those early years in Cleveland. He's taken the most shots on his team during the playoffs by a margin of 32 attempts and he's at a career-low efficiency with just 37.1 percent from the field and 21.6 percent from three. Rose has 37 attempts from three despite the poor shooting compared to 22 for Luol Deng who's shooting over 40 percent from behind the arc. That's not good distribution from the point guard.

Part of Rose's high shot rate that has to do with the disappearance of Carlos Boozer who's failed to carry much of the offensive load as the second fiddle and inside threat he was supposed to be. However, it doesn't excuse Rose's assist percent (32.3) which is sixth among playoff point guards behind Chris Paul, Rajon Rondo, Russell Westbrook, Jason Kidd and Andre Miller.

Rose got away with this style of play against the Pacers in the first round, but against a better team Rose is going to need to do far more than simply score the ball at a fairly inefficient rate.

For a guy who's likely to be named the league MVP for the 2010-11 season, it's a fairly disappointing playoffs for Rose so far...if you can get past the late game heroics.