Derrick Williams Trade To The Suns, Here's How

Share All sharing options for: Derrick Williams Trade To The Suns, Here's How

With the NBA Draft lottery now over we can start exploring various trade options with teams at the top of the draft. The Minnesota Timberwolves are already rumored to be willing to entertain offers for their second overall pick in the 2011 NBA Draft. It makes sense given the Timberwolves existing strong core of young players. Adding a Derrick Williams to a front line that already has Kevin Love and Michael Beasley would be foolish. The Phoenix Suns are a team that could and should take a run at that No. 2 pick.

Looking at the Minnesota roster and having seen them play last season, the position they need most help at is small forward. They are also looking for veteran help and on a team with a couple of young hot heads (Michael Beasley and Darko Milicic) they need a high-character guy.

The Phoenix Suns have a guy that fits both parts of that bill -- Jared Dudley. The Suns and their fans love Dudley but if you want to get the second overall pick and a guy like Derrick Williams you have to give up talent. Dudley's smart defense, floor space, and great passing makes him a perfect fit for the Wolves.

To make the money work, the Wolves would send back Martell Webster who's owed $5.2 million next season and only has $600k guaranteed the following year. The Suns would of course throw in their 13th pick in the 2011 NBA Draft or if the Wolves don't want that, they could offer a 2012 first round pick.

Another option to sweeten the deal for Minnesota would have the Suns taking on the contract of Nickola Pekovic who is owed roughly $9 million over the next two years before becoming a restricted free agent in 2013. The Suns would send back Robin Lopez who's only got one year left on his rookie deal.

It might take a bit more to get the second pick, but the Suns certainly should be on the phone with Timberwolves GM David Kahn to figure out what the price to get Derrick Williams would be.

Williams would be a great fit on the Suns with his ability to play the pick and roll with Steve Nash, space the floor, and rebound. He may not be an elite power forward like Blake Griffin, but he's certainly a player to build around.

After some feedback, it is likely this package wouldn't be enough for Minnesota. The Suns may not have the pieces needed to make a deal but Dudley would be a perfect fit for the Wolves right now and we have to assume there will be phone calls made. 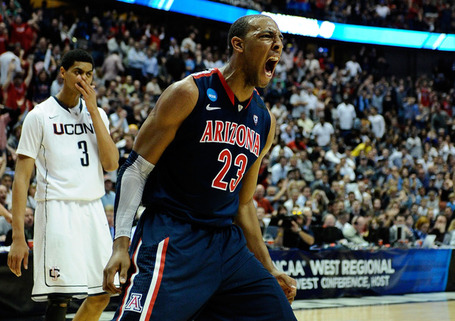 ANAHEIM, CA - MARCH 26: Derrick Williams #23 of the Arizona Wildcats reacts after a dunk against of the Connecticut Huskies during the west regional final of the 2011 NCAA men's basketball tournament at the Honda Center on March 26, 2011 in Anaheim, California. (Photo by Kevork Djansezian/Getty Images)