The Phoenix Suns have just a .6 percent chance of winning the 2011 NBA Draft Lottery on Tuesday evening. To call it a long shot is an insult to long shots everywhere. But that won't stop us from playing an interesting "what if" game with the top of the 2011 NBA Draft.

IF the Suns somehow buck 43 years of bad luck and break the burial curse to nab the top pick, which player should the Suns take? Kyrie Irving would be a great pick to groom as the Steve Nash replacement while Arizona's own Derrick Williams has tremendous front court scoring potential.

Kyrie Irving only played in 11 games as a freshman at Duke but the kid by all accounts has it all. He shoots, he scores, he passes, he leads. He can even defend a bit despite being 6-2 with an average wing span and fine but not elite Derrick Rose or Russell Westbrook type athleticism. Read this about him from Draft Express and there's one point guard that comes to mind.

Not as blazingly fast with his first step as Derrick Rose, John Wall, or even Kemba Walker, Irving plays at a very unique pace that keeps defenses consistently off-balance and allows him to get to the basket seemingly whenever he needs to. Able to drive left or right almost equally well, he has excellent timing on his drives, very good body control, and the ability to operate at different speeds. Rather than just attempting to blow by opponents using his pure first step, Irving instead likes to toy with his defender, using tricky stutter-steps, strong body fakes, and perfectly timed hesitation moves to beat opponents smoothly and slitherly.

Irving would almost certainly be the next in a long line of great Phoenix Suns point guards...IF the Suns win the lottery and IF they passed on Derrick Williams. 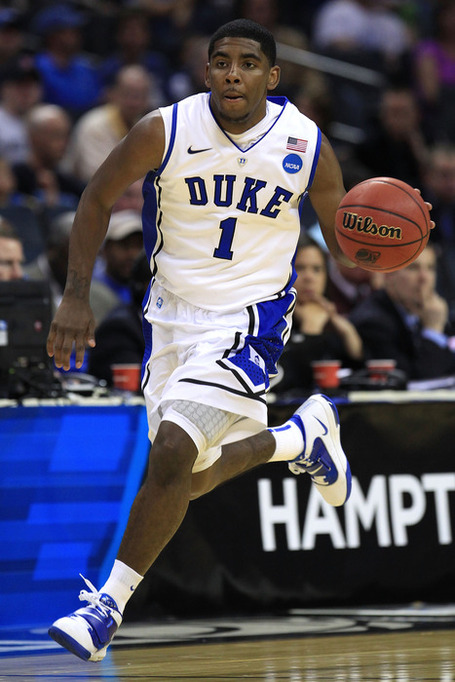 CHARLOTTE, NC - MARCH 18: Kyrie Irving #1 of the Duke Blue Devils moves the ball in the second half while taking on the Hampton Pirates during the second round of the 2011 NCAA men's basketball tournament at Time Warner Cable Arena on March 18, 2011 in Charlotte, North Carolina. (Photo by Streeter Lecka/Getty Images)

Derrick Williams is a flat out stud. As a power forward Williams would be a perfect fit for the Phoenix Suns. He has the athleticism and skill to play pick and roll, the range to space the floor, the intensity and desire to rebound above his size and out of his area, and he's a flat out winner.

Williams might not be an elite power forward due to his size, but there's very little doubt he's an immediate impact player who would add wins to a Phoenix Suns team that desperately needs them. Paired next to Marcin Gortat and playing another few years with Steve Nash, Derrick Williams makes the Suns a playoff team again.

If the Suns were to be so lucky as to win the NBA Draft Lottery, which do you take?