The Phoenix Suns are not a lucky team. Throughout their history misfortune has fallen on the heads of the Suns organization in the form of lost coin flips and blown calls to a devastating plane crash that took the life of a young prospect. The Suns hope that Mark West's presence at the 2011 NBA Draft Lottery will give the franchise a stroke of good fortune to balance out the curse.

The Salt River Valley that is home to the modern city of Phoenix was home for thousands of years prior to the Hohokam people. According to the City of Phoenix Guidelines for Archaeology, there are many construction sites in the downtown area that have unearthed the remains of Native American presence. The government document includes detailed instructions on how to deal with remains that are discovered during construction.

It is no stretch to assume that the builders of Veterans Memorial Coliseum didn't take many precautions in the early 60's when they were excavating the site that would become the first home of the Phoenix Suns. It's well known that downtown Phoenix is filled Hohokam burial sites that in more recent times have slowed various construction projects. Were some remains disturbed in the early 90's when the US Airways Center was being built? It's hard to think they weren't.

What else but a burial ground curse explains the Phoenix Suns string of bad luck. Here's a list of some of the more notable misfortunes:

Those are just a few examples of the kind of misfortune that all teams face. For the Suns however, there's not once been a corresponding incident of franchise-changing good luck. Not one case of the lottery balls favoring the team that must be cursed.
On Tuesday night the 2011 NBA Draft Lottery will be held. Former Suns' player Mark West will be the good luck charm that the team hopes will change all that and defy the two percent odds and land a top three pick in the 2011 NBA Draft. 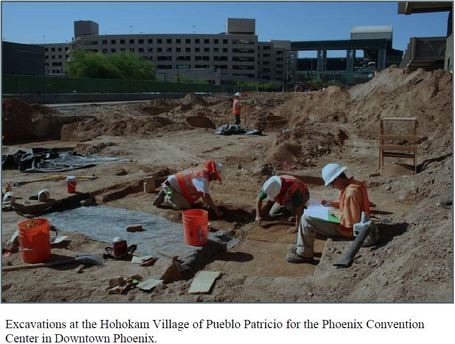