Not a bad way to spend a Sunday if you are a fan of the 2011 NBA Playoffs. The schedule begins with the first Game 7 of the postseason in Oklahoma City. Those rowdy fans will be hoping for a better game out of their star, Kevin Durant while the Memphis faithful are banking on Zach Randolph delivering in the clutch again. Later in the evening LeBron James follows his pal Dwyane Wade home to Chicago to kick off their series against another local kid, Derrick Rose.

Game 7 of the Thunder vs. Grizzlies tips off at 3:30 p.m. ET / 12:300 p.m. PT on ABC. The Thunder will need to hit their outside shots to win this game and fight the Grizzlies to at least a draw on the boards. The Grizzlies need a few of their role players to step up and help Randolph get the win and continue their amazing run from the eighth seed.  (Rick Kamla and Steve Kerr video preview of Game 7.)

The Bulls vs. Heat starts at 8:00 p.m. ET / 5:00 p.m. PT on TNT. For the Bulls this series is all about getting points from Carlos Boozer, Luol Deng and any other player not named Rose. Derrick's offense can't carry this team against the Heat. For Miami, the balance between Wade and James is fantastic. If they can get a couple solid scoring games from Chris Bosh they could roll through the series. (Game 1 video preview from NBA.com)

As predicted, the best player on the floor during this series will not be the 2010-11 NBA MVP. 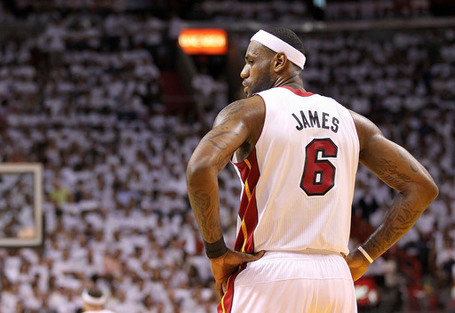 MIAMI, FL - MAY 11: LeBron James #6 of the Miami Heat looks on during Game Five of the Eastern Conference Semifinals of the 2011 NBA Playoffs against the Boston Celtics at American Airlines Arena on May 11, 2011 in Miami, Florida. (Photo by Mike Ehrmann/Getty Images)