The Memphis Grizzlies took care of their home court business with a great defensive effort in the second half to beat the Oklahoma City Thunder and force the first Game 7 of the 2011 NBA Playoffs. The Thunder scored just 29 points in after the break and Kevin Durant went 1-9 against a determined Grizzlies defense that left him little space to work. These two evenly matched teams now head back to Oklahoma City for a Game 7 on Sunday that promises to be a war.

The difference between the the Thunder and Grizzlies is how they get their points and the edge goes to Memphis. The Thunder have the two best perimeter players in the series in Durant and Russell Westbrook and their third best player, James Harden, is a wing as well. In the three Thunder wins they shot 38 percent from the three-point line (22-58) while in the three losses they went 23 percent (14-60).

With Kendrick Perkins on the floor, the Grizzlies defense can cheat off and focus on stopping Westbrook's penetration without leaving shooters open while on the perimeter the combination of Shane Battier and Tony Allen have fought through screens and worked their tails off to deny Durant the ball in good position.

Memphis, as we saw in the fourth quarter of Game 6, relies on scoring in the paint and running the offense through the post. Despite all the changes and evolution of the NBA game, a team with two post players who can score, pass and rebound is always going to be a tough out in the playoffs.

Game 7 promises to be an all out war between these two physical and determined young teams. The game starts at 3:30 p.m. ET / 12:30 p.m. PT on Sunday on ABC.  (Rick Kamla and Steve Kerr video preview of Game 7.) 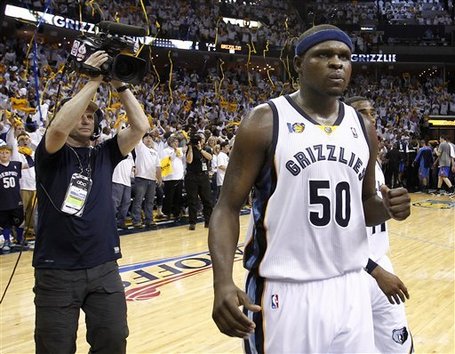 Memphis Grizzlies forward Zach Randolph (50) celebrates after beating the Oklahoma City Thunder in Game 6 of a second-round NBA basketball playoff series on Friday, May 13, 2011, in Memphis, Tenn. Randolph led the Grizzlies with 30 points as they won 95-83 to even the series 3-3. (AP Photo/Wade Payne)