The best series of the 2011 NBA Playoffs resumes Friday with the schedule calling for Game 6 of the Memphis Grizzlies vs. Oklahoma City Thunder. A tired Grizzlies team was run out of the gym in OKC in Wednesday's Game 5 and there's every reason to believe the same will happen to the Thunder in Game 6.

Memphis hasn't exactly been the most difficult place to play over the last few years, but that city has really stepped up for the playoffs and fully embraced a couple of the NBA's more unique characters. Zach Randolph bounced around from Portland to New York to Los Angeles before finally finding a home in Tennessee. Tony Allen is as unlovable as they come but is a folk hero to the good people of Memphis.

That combination of home town support from a city dealing with devastating Mississippi River flooding and the mental toughness of Lionel Hollin's team should provide a bounce back performance in Friday's Game 6 of this fascinating and scintillating NBA Playoff series. The inside advantages of a rested Zach Randolph and Marc Gasol will once again be too much for OKC to handle.

Tip off for Game 6 of Grizzlies vs. Thunder is scheduled for 9:00 p.m. ET / 6:00 p.m. PT on ESPN. (Video preview from Dick Stockton and Mike Fratello provided by NBA.com.) The Thunder lead the series 3-2 and can advance to the Western Conference Finals with a win. 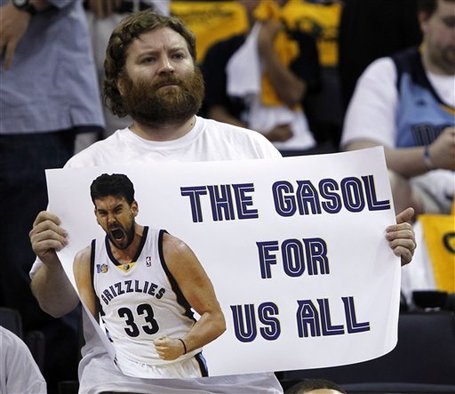 A Memphis Grizzlies fan holds a Marc Gasol poster during the first half of Game 4 between the Grizzlies and the Oklahoma City Thunder in a second-round NBA basketball series Monday, May 9, 2011, in Memphis, Tenn. (AP Photo/Wade Payne)