The Chicago Bulls defeated the Atlanta Hawks 93-73 and clinched their Eastern Conference Semifinals series 4-2, just as predicted. The Bulls now advance to the 2011 NBA Playoffs Eastern Conference Finals to face LeBron James and the Miami Heat. That should be a good series and one that we will preview in depth at a later time. The key for the Bulls, however, is the version of Derrick Rose that led his team to a Game 6 win over the Hawks.

This was by far Derrick Rose's best performance on Thursday night in Atlanta. Individually, he scored 44 points and shot just under 60 percent in Game 3, but by sharing the ball (12 assists) and getting his teammates involved the Chicago offense as a whole had it's best game of the playoffs.

Defense is of course, the hallmark of the Bulls and they will face their toughest test yet in the Miami Heat, but they will defend LeBron and Wade and Bosh as well as anyone can. The question for Chicago is how many points can their offense generate. That isn't a matter of Derrick Rose hitting shots or not. Chicago has to find a way to keep all of its players involved offensively so they are putting pressure on the Heat defense from multiple points of attack.

In Game 6 versus the Hawks they had five players in double figures. Rose took only 14 field goal attempts, the fewest shots he's taken in the playoffs, but had his second-most efficient scoring game. As a team, the Bulls averaged a respectable 22 assists per game in the regular season but saw that drop to 17 in the playoffs. They had 34 against the Hawks in Game 6. It's not a perfect measure, but a team with under 20 assists generally isn't moving the ball well enough to beat a good team.

Rose is only 22-years-old and is a perfect combination of humility, desire and talent. I would fully expect his game to evolve as he gets more experience and of the two great games he had in the Hawks series, let's would hope it's Game 6 that's the model for his career. Save the Game 3, 44-point heroics for the rare occasion. That's what a winning point guard needs to bring. 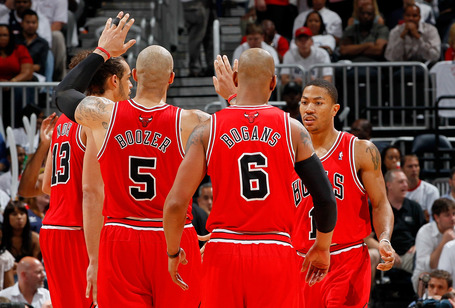 ATLANTA, GA - MAY 12: Derrick Rose #1 of the Chicago Bulls reacts after drawing a foul from the Atlanta Hawks with Joakim Noah #13, Carlos Boozer #5 and Keith Bogans #6 in Game Six of the Eastern Conference Semifinals in the 2011 NBA Playoffs at Phillips Arena on May 12, 2011 in Atlanta, Georgia. (Photo by Kevin C. Cox/Getty Images)