Share All sharing options for: NBA Draft: Derrick Williams Headlines 54-Player Combine, How Tall Is He?

The 2011 NBA Draft will get a lot more information next week as the annual combine is held in Chicago. Unlike last weekend's massive work out held in New Jersey, this combine will gather most of the first round projected picks from Derrick Williams and Kyrie Irving to potential second round picks like Isaiah Thomas of Washington.

In additional to participation, the activites are much different between the two events. Instead of five-on-five work outs that give scouts a chance to get an up-close look at potential draft picks, the combine is about measuring key attributes. From agility test to an official height measurement (with and without shoes), the teams will come out of the May 18-22 knowing much more about the players they will select in the 2011 NBA Draft.

The measurements we pay close attention to is height and wing span. College teams are notorious for fudging the actual height of their players.

Is Derrick Williams really the 6-8 the Wildcats listed him at or is he really 6-6 as some believe. Even more important, how long are his arms and how high can he jump. As many note, the game of basketball isn't played with the top of the head. How far a player can reach with his hands is much more important.

All these questions and more will be answered in Chicago. 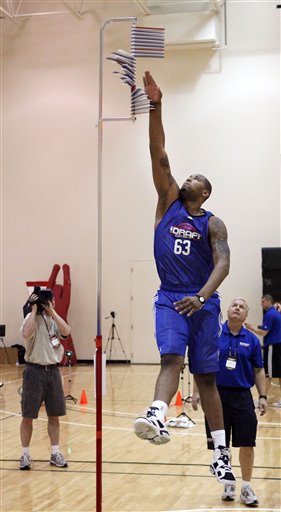