Grizzlies Down But Certainly Can Come Back On Thunder

Share All sharing options for: Grizzlies Down But Certainly Can Come Back On Thunder

This Memphis Grizzlies vs. Oklahoma City Thunder series has been by far the most compelling match up of the 2011 NBA Playoffs. We've already seen the Lakers, Celtics and Spurs eliminated in a "changing of the guard" kind of "get rid of the old, dead weight" sort of way. The two big name teams that are left -- the Mavericks and the Heat -- are good stories but they lack the luster of a fresh faces.

Watching Kevin Durant and Russell Westbrook battle each other for shots and witnessing the emergence of Zach Randolph as a winner is far more invigorating to the NBA fan than another LeBron James story.

Unlike the Chicago Bulls series with the Atlanta Hawks, this duel out west features far more than Derrick Rose's individual brilliance mixed in with selfish shot selection. In that series there's a clearly defined pattern with the Bulls winning when they show up defensively and the Hawks winning when they manage to score over 100 points.

In the Thunder vs. Grizzlies series we've see a bit of everything so far and that promises a fantastic conclusion to a match up that seems destined for a Game 7 classic.

In Game 1 the Memphis bigs dominated offensively which seemed to shock the Thunder as if they have no idea that Zach Randolph AND Marc Gasol were both offensive threats. In Game 2 the Thunder bounced back with hot outside shooting and a faster pace. In Game 3 Westbrooks' poor decision making doomed OKC to a blown fourth quarter lead.

The Game 4 triple-overtime classic was simply a battle of attrition won by the team with three young stars. The combination of playing on the road with only one day's rest gave us the Game 5 blowout and leaves us with the Thunder holding a 3-2 lead in the series. It's a lead that historically heavily favors the Thunder but in this case all signs point to another Grizzlies comeback.

We know that the Grizzlies are a mentally tough team so there's no worries about them being depressed by the blowout loss. They actually benefit from the blowout since they were able to rest their players and head back home for Game 6 on Friday with a fresh start physically.

Zach Randolph is due for a strong game and most importantly, the Grizzlies defense seems to have figured out the Thunder to a large degree. They will pack the paint against Westbrooks' penetration and stick tight to Durant. That forces the Thunder to put an extra shooter in the game to space the floor which hurts them defensively. If the Thunder win, they will need to shoot over 45 percent from long range which they did in Games 2 and 5.

Mostly though, this series will come down to the better coached team that can score in the paint and is more mature and mentally ready. That favors the Grizzlies beating the Thunder in a Game 7 that should be fantastic. Make sure you free up your Sunday afternoon to watch that one. 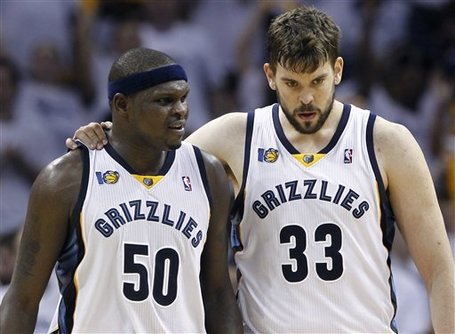 Memphis Grizzlies center Marc Gasol (33), of Spain, talks with forward Zach Randolph (50) during the first half against the Oklahoma City Thunder in Game 4 of a second-round NBA basketball playoff series on Monday, May 9, 2011, in Memphis, Tenn. (AP Photo/Wade Payne)