The Atlanta Hawks will host the Chicago Bulls in Game 6 of their 2011 NBA Playoff Eastern Conference semifinals series on Thursday evening. The schedule shows the Hawks down 3-2 to the Bulls which makes this a true "must win" game. This series has taken on a predictable pattern with the Bulls defense and Derrick Rose's offense carrying Chicago to it's three wins and the Hawks outside shooting from Joe Johnson and Jamal Crawford the key for Atlanta's two victories.

In their three wins the Bulls defense held Atlanta to under 83 points per game while giving up over 100 points in both losses. Chicago's offense isn't good enough to carry the team through a bad defensive game despite Rose's individual flashes of brilliance.

Another key stat to look at is rebounding. In Chicago's three wins they are plus-36 in total rebounds. In the two Atlanta wins the rebounds are dead even.

The Bulls have the ability to close out this series if they bring their effort and intensity on the defensive end of the floor. For Atlanta, they are going to need hot outside shooting from their guards and an over-the-top effort on the glass to overcome the Bulls interior advantages. 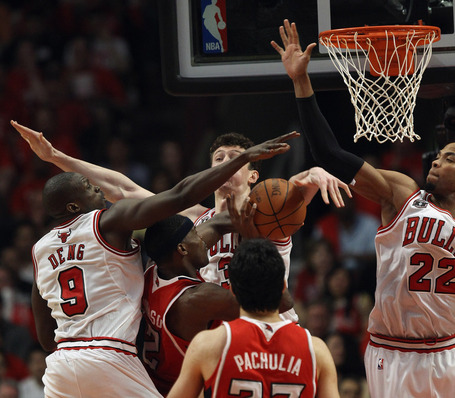 CHICAGO, IL - MAY 10: Joe Johnson #2 of the Atlanta Hawks is surrounded by (L-R) Loul Deng #9, Omer Asik #3 and Taj Gibson #22 of the Chicago Bulls in Game Five of the Eastern Conference Semifinals in the 2011 NBA Playoffs at the United Center on May 10, 2011 in Chicago, Illinois. The Bulls defeated the Hawks 95-83. (Photo by Jonathan Daniel/Getty Images)