The 2011 NBA Playoff schedule for Wednesday picks up with the two series that managed to both give us overtime in their Game 4 meetings. The Oklahoma City Thunder are back home hosting Memphis after out-lasting the Grizzlies in a triple-OT classic. The Boston Celtics head back to South Beach down 3-1 to the Miami Heat after LeBron James did what was said he couldn't do, and delivered in the clutch.

On Tuesday the Chicago Bulls took care of their Game 5 business by holding the Atlanta Hawks to just 83 points. Derrick Rose scored 33 points on 24 shots but as been the case in all their wins, it was the Bulls defense that's the story. The Hawks went just 1-12 from the three-point line and Joe Johnson and Jamal Crawford combined for 17 points.

The East Coast teams kick off the NBA Playoff schedule for Wednesday with Game 5 of the Heat vs. Celtics at 7:00 p.m. ET / 4:00 p.m. PT on TNT. The Heat are using their defense to dominate this series and will be helped by Rajon Rondo's elbow injury. Offensively, it's all about their Big Three scoring. When LeBron James, Dwyane Wade and Chris Bosh combined for 75 points or more, the Heat are 30-3. So much for all that hand wringing about lack of depth. (Video preview via NBA.com.)

The late game on Wednesday is a continuation of the best series in the 2011 Playoffs so far. The Grizzlies and Thunder and going at each other and OKC showed a lot of heart (and stamina) by winning the pivotal Game 4 triple-OT thriller to tie the series 2-2. Kevin Durant knew they couldn't afford to go down three games to one in a seven game series so he took the ball from Russell Westbrook and won the game.

The Thunder haven't exactly looked great but the team with the best player usually manages to win at some point. With only one day of rest after most of the starters played over 50 minutes, Game 5 of Thunder vs. Grizzlies tips off at 9:30 p.m. ET / 6:30 p.m. PT on TNT. You don't want to miss this one. (Video preview via NBA.com.) 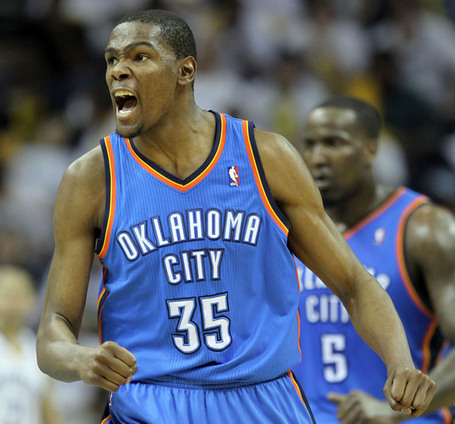 MEMPHIS, TN - MAY 09: Kevin Durant #35 of the Oklahoma City Thunder celebrates during the game against the Memphis Grizzlies in Game Four of the Western Conference Semifinals in the 2011 NBA Playoffs at FedExForum on May 9, 2011 in Memphis, Tennessee.The Thunder won in tripple overtime 133-123. (Photo by Andy Lyons/Getty Images)