There's a set of big man twins in the 2011 NBA Draft so it was only a matter of time before the lesser of the two ended up on a mock draft going to the Phoenix Suns. Robin Lopez was drafted in 2008 by the Suns with the 15th pick overall with his brother Brook going 10th to the Nets. It would be ironic if they did end up picking Markieff Morris with the 13th pick this year.

Of course, as with all mock drafts, this one isn't to be taken too seriously. It's fun to play the "lesser twin" card for a joke or two, but the reality is that we will see many names cycle through the number 13 slot before the 2011 NBA Draft arrives on June 23rd.

Markieff and his brother Marcus played three years for the Kansas Jayhawks. They are 6-9 or 6-10 with wing spans unofficially reported to be around 6-7 which is not the kind of length that makes for a good NBA shot blocker.

Athletic, mobile and high motor is how Markieff is often described. He's shown the ability to step out and knock down mid-range shots which puts him ahead of similar Suns players like Lou Amundson and Gani Lawal. Like those bench players, however, Markieff isn't a polished post player and is better known for his rebounding, energy and defense.

Here's the book on Markieff from the esteemed Draft Express who currently has Morris going 12th to the Jazz and Markieff 13th to the Suns.

Looking at his freshman season alone, Morris seemed bound for a basic catch-and-finish role predicated on hustle and defensive toughness that would have him spending virtually all of his times at the rim or in the paint. His offensive skill set now fills a variety of roles that fit nicely with the ever-increasing versatility of the power forward position on the NBA level.

Defensively, Morris has clearly improved on paper, cutting down on his fouls and rebounding the ball at an impressive rate. However, it is his toughness and the way he takes things personally on the defensive end that are most intriguing. His wingspan won't allow him to be a big factor as a weakside shot blocker, but he's got the mentality to be a solid one-on-one defensive player and a quality area rebounder early in his career. 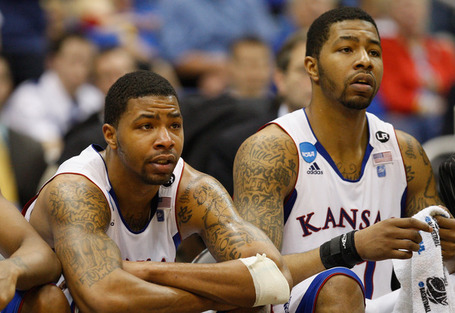