Are those guys still playing in Memphis? That was certainly quite a game Monday between the Oklahoma City Thunder and Memphis Grizzlies. Neither team played "great" but the Grizz made several huge shots and ASU's James Harden was huge. Fortunately, those guys have the day off and don't play again until Wednesday. Tuesday's schedule for the 2011 NBA Playoffs has the Chicago Bulls hosting the Atlanta Hawks in their series that's tied 2-2.

While the Grizzlies vs. Thunder series is full of mystery and hope and the Celtics vs. Heat at least has thrill of LeBron James and Dwyane Wade, the Bulls vs. Hawks has been pretty straight forward and easy to figure out. When Derrick Rose shoots close to 60 percent the Bulls win. When Joe Johnson makes threes the Hawks win.

Johnson scored 34 and 24 points and went a combined 8-10 from three in Atlanta's two wins. In the Hawks losses Joe scored just 10 and 16 points and was 2-5 from three.

Derrick Rose had one great game in the series and the Bulls won big.  He scored 44 points and shot close to 60 percent from the field. The Bulls defense is going to be good enough to win if Rose can score like that. Otherwise, if he's taking 27 shots and hitting less than 40 percent they will need to shut down both Johnson and Jamal Crawford. There's not much mystery here. 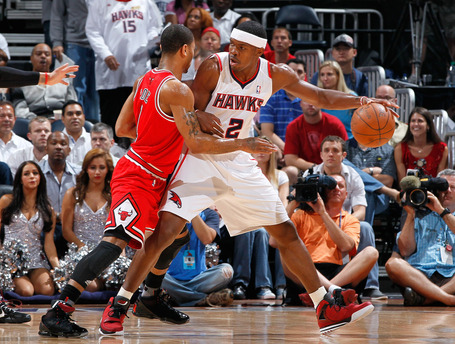 ATLANTA, GA - MAY 08: Joe Johnson #2 of the Atlanta Hawks drives against Derrick Rose #1 of the Chicago Bulls in Game Four of the Eastern Conference Semifinals in the 2011 NBA Playoffs at Phillips Arena on May 8, 2011 in Atlanta, Georgia. (Photo by Kevin C. Cox/Getty Images)