Arizona forward Derrick Williams has picked himself an agent (Rob Pelinka) and is in the process of saying his farewells in Tucson. According to Williams twitter account, he's going to leaving his college town for awhile. But before he goes and starts the predraft workout circuit, Williams has one final bash planned.

Williams is listed as the top pick in every mock draft except one. Draft Express has the Minnesota Timberwolves passing on Williams to take point guard Kyrie Irving. Here's what some of the experts are saying about the former Wildcat.

Chad Ford of ESPN calls Williams, "One of the best scorers in the college game, Williams has dramatically improved his jump shot and his ability to attack the basket, making him a threat from anywhere."For his height,

Draft Express talked about Williams shooting form: "Derrick Williams might be one of the best shooters at his position, shooting 56.8% from the three point line on 74 attempts. He is also top six nationally in the two advanced shooting metrics, posting an eFG% of 65.0% (6th nationally) and a TS% of 69.0% (4th nationally). In terms of his form, Williams has a very smooth stroke that is easy to repeat, no matter if he is catching and shooting or taking a shot off of the dribble. He takes off and lands in the same area, and his footwork is very good."

NBADraft.net compares Williams to NBA players Michael Beasley and David West. They had this to say about his weaknesses: :Williams is slightly undersized for a power forward at the next level, lacking great bulk ... He will likely always use speed and length to compensate for a lack of brute strength ... He would really benefit from developing a consistent mid range jump shot ... His face up game would be more effective, and it would add another dimension to his offensive repertoire ... At times, takes him a little too long to execute his move and get off his shot ... Needs to improve vision in the post - when the ball goes down low to him it rarely gets kicked out."

For more information on Williams final party in Tucson to be held on Friday, see the flyer below: 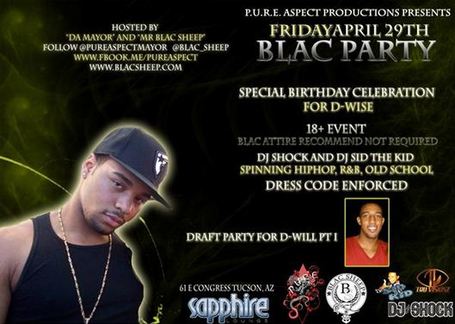