Have you ever wondered exactly how the NBA Draft Lottery works? You might know there's something about ping pong balls and most people understand that teams with the worst records get more chances to "win". Well today is your lucky day (regardless of what day you are reading this, it is still lucky) because we are going to explain exactly how the NBA Draft Lottery works and what that means for the Phoenix Suns.

The first thing to determine is the order in which the teams finished the season. Seeding is a very important factor in this entire lottery process. What we do is take the records of the team and line them up in reverse order from worst to best of the 14 lottery teams.

Here's that list for 2011 (via SB Nation/NBA) along with the odds that each team will win the lottery and get the first pick or a top three pick. We'll explain that more after the list:

Now that we have our list, each team is assigned a certain number of 1,000 possible permutations. The team with the worst record gets 250 out of 1000 chances (25%) and so on down the line.

The Suns, slotted at the 13 seed, get six winning permutations.

Once the permutations have been randomly assigned to each team, the ping pong balls can spring into action. 14 of them are put in the jumble machine with each ball having a number printed on it (one through 14). When the time comes on May 17, four balls are drawn and the numbers are arranged to match the permutations given.

For you math geeks, here's a more detailed explanation:

There are three drawings of the balls. The first determines the first overall pick in the draft, the second drawing the second pick and the third drawing the third pick. The 11 teams not selected are put in order based on the original seeding.

As the 13th seed, the Suns have a .006 chance of "winning the lottery" and getting the number one pick and a .007 and .009 chance of getting the second or third seed. They have a 96 percent chance of end up with the 13th overall draft pick.

In the history of the draft lottery going back to 1985, two teams won the first pick when they had less than a two percent chance going in.

In 1993 the Orlando Magic finished with the 11th-worst record and turned a 1.52 chance into the first pick. You might remember a guy named Chris Weber who the Magic traded to Golden State for Penny Hardaway and three future first round picks.

The NBA Draft Lottery will be held on May 17. Suns fans, cross your fingers but for your sanity's sake, just plan on drafting 13th. 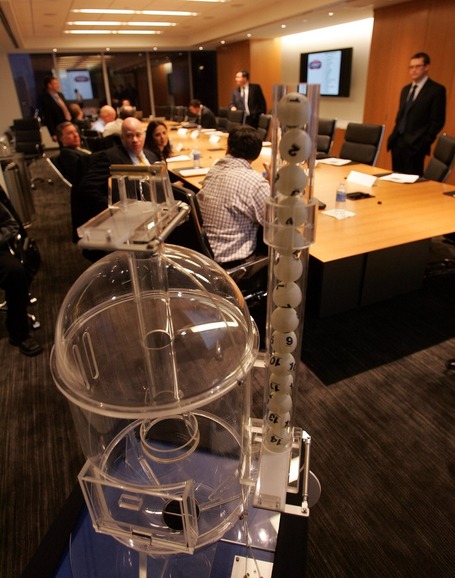