With Channing Frye out of the lineup for two-to-three weeks, the Phoenix Suns are missing a big man who can stretch the floor and shoot the ball. However, by inserting Hakim Warrick into the mix they are getting one of the league's premiere athletes in his place. In Warrick's first game starting in place of Frye he had a career-high 32 points as the Suns adjusted their plays to take advantage of Hakim's athletic ability.

This baseline out of bounds play the Suns ran with 1:30 left in the tight game demonstrates one of the adjustments coach Alvin Gentry made.

Here's a video of the play with a full breakdown after the jump.

The first thing that stands out about this play is Steve Nash. Normally, Grant Hill is the inbound passer on these set plays. With the ball in Nash's hands on the baseline, Grant Hill starts at the free throw line and Hakim Warrick and Marcin Gortat were stacked on the lane. Gortat clears out as Hill comes in to screen Warrick's man. 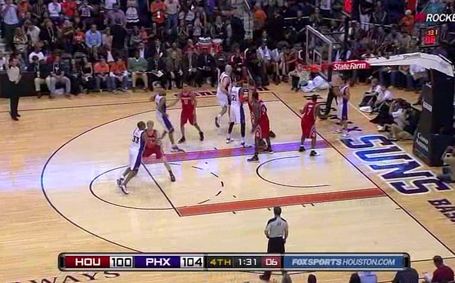 Here you can see Hill setting a great screen on Patrick Patterson. This is why Hill is on the court and not passing the ball. Hill's man, Chase Budinger, followed Hill into the scrum but made the crucial mistake. 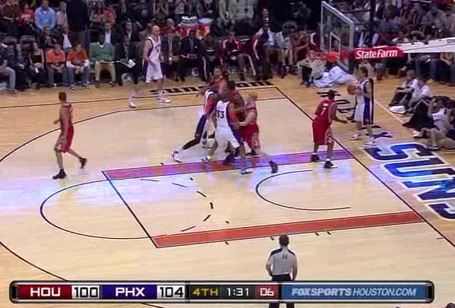 Budinger isn't alert enough to switch off Hill and move to the front of the rim to contest Warrick who curled out of the pack and took Nash's lob pass and slammed it home. This isn't a play the Suns can run with Channing Frye. 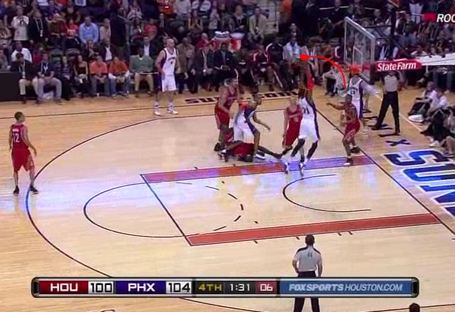