Goran Dragic Doesn't Want To Look Back At Frustrations With Suns

Share All sharing options for: Goran Dragic Doesn't Want To Look Back At Frustrations With Suns

Goran Dragic is back in Phoenix wearing red shoes to match his Houston Rockets uniform. He admits it feels weird to be here as a visitor but overall he seems to be adjusting well. He came out on the court for his early warmups and immediately went over to share hugs and smiles with some of his former teammates and coaches.

Alvin Gentry, who normally doesn't come out on the main court before the game, made a point to find his former player and gave Dragic a big hug.

When asked what went wrong with Dragic this season that necessitated a trade, Gentry said this that is wasn't so much about anything Goran did that got him traded as much as the team's desire to get a more proven scorer in Brooks to run the second unit.

Steve Nash speculated on some of the other factors that prevented Dragic from repeating last year's performance that made him one of the top back up point guards in the league.

"I feel like maybe at his age, there was a lot of change this year. I don't if that was difficult for him but last year they had great chemistry on the second unit and he flourished. This year it was a totally different second unit and maybe it made things more difficult for him. I couldn't really say for sure why, but that would be one of the factors to me," Nash said.

Dragic thanked the Suns organization and says he only wants to help his new team win games.

Rockets coach Rick Adelman said he's been impressed so far with Dragic's work effort and aggressiveness. He called Goran a "heady player". He expects to Dragic to play somewhere in the 15 to 18 minute range backing up Kyle Lowry but once he's had time to practice more with his team, Adelman might use Dragic and Lowry together in the back court as well. 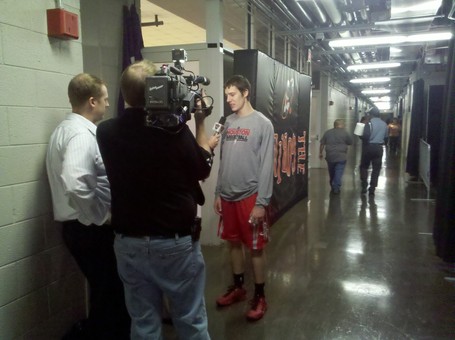