Vince Carter is a very likable guy. He smiles a lot. He talks to many people. He's friendly and outgoing. He would be a pretty awesome neighbor to have and not just because you could chill in his basement and watch video clips of him jumping over people for hours and hours.

It's been pretty clear to those of us who watch the Suns closely and have had the opportunity to observe Vince in his natural habitat that his friendly nature extends to the game itself. He's often seen chatting it up and sharing a laugh with opponents during games, even those he's never played with.

That's Vince, just a nice guy who likes people. It's a trait that will help him as a future motivational speaker -- an ambition he talked about after finishing a long monologue last month about believing and staying positive in the face of adversity.

"We're the ones that have to fight for each other each and every night, and if we don't believe in each other, who will?" Carter said with the passion of a politician while speaking to the media after practice.

Stirring stuff, as was his display of humanity on the court during Monday's win over the Golden State Warriors.

After setting a solid screen on Stephen Curry in the back court that knocked the young guard on his rear end, Vince immediately gave up an opportunity to take advantage of a fallen opponent and reached out a hand to help Curry up.

Here's how the sequence went.

The Suns at this point were down nine with just under three minutes left in the game. They had already let a 23-point lead slip to within five and in a recent game almost blew a 12-point lead to the Hornets in less than two minutes.

After a Warriors basket, Stephen Curry stayed in the back court to pressure Nash. Carter set a pretty solid screen that blind sided Curry and sent him to the floor. 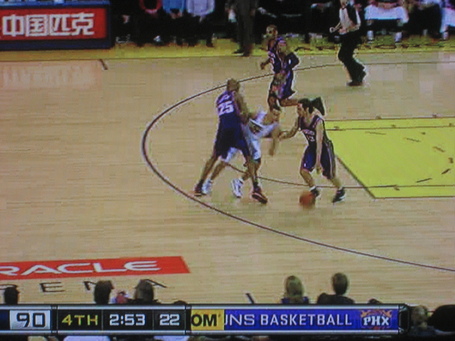 There was nothing dirty about the screen. We are not talking about Kevin Garnett's shoulder slam into Marco Belinelli. It was just a normal basketball play.

Vince reacts as the kind, friendly player that he is and immediately gestures an apology to Curry as he's still falling to the floor. "Sorry, kid", he seems to be saying with his hands. 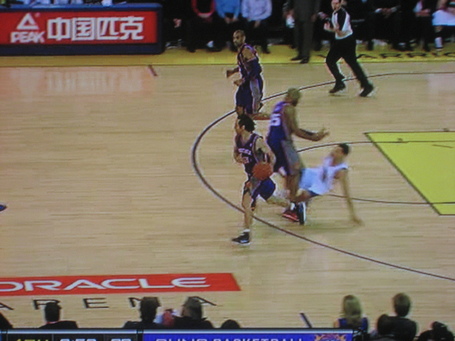 At this point, Vince could have done the unsportsmanlike thing and rushed down court to help his team take advantage of the fallen opponent who was knocked over by a legitimate screen. Instead, Vince reaches out a hand of helping friendship to Curry, who is after all, a really nice guy himself by all accounts. 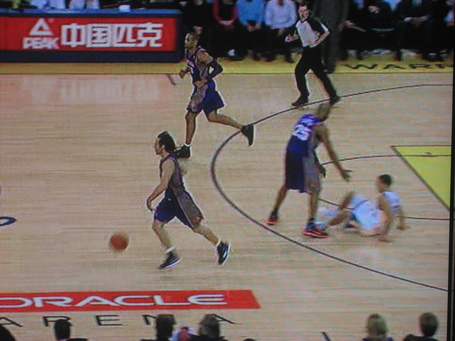 Who can blame Vince for this act of human kindness?

After all, Vince and Steph's dad, Dell Curry, were teammates for three years in Toronto from 1999-2002. We know for a fact from this video below that young Steph was hanging around the team. So lets not vilify Vince for helping up a kid who's basically like his nephew.

Winning isn't all that important in the scheme of things, is it?