The NBA All-Star Game is going on in Los Angeles but one of the league's top defenders isn't going to be there. A look at what makes Grant Hill so successful on defense.

In his press conference after the Phoenix Suns beat the Utah Jazz this week, Alvin Gentry interrupted himself to sing the praises of Grant Hill. Hill, with some help from that great defender Steve Nash, held All-Star Deron Williams to 2-12 shooting and came up with a big stop in the final seconds of the game. All in a day's work for Hill.

"I can't say enough about Grant and I don't think he gets the credit," Gentry extolled, "I still say that if anyone should be on All-Defensive Team, it should be him. I'll continue to say that no one out there asks a guy to do more."

Grant Hill has turned himself into one of the top wing defenders in the league and the numbers prove it. He's successfully guarded everyone from Derrick Rose, who scored 35 points but needed 33 shots to do it, to Blake Griffin, who was out-worked by Hill's physicality and held in check for an entire half of basketball.

It's not surprising that Hill doesn't get much attention for his defense. The Suns haven't exactly built a reputation as a team of stoppers and Hill (along with Nash) aren't the sexy young names that everyone likes to talk about. But people that know and watch what Hill's done in his 16th NBA season certainly appreciate what he brings to his team.

What Makes Grant Hill A Great Defender Of Elite Players

When you talk to his teammates, coaches and Grant himself, three things stand out as the source of Hill's defensive prowess: experience, preparation, and desire.

When Grant Hill first came into the league he was known as a dynamic, slashing, scoring wing player. In each of his first six years as a pro he made the All-Star team and either first or second All-NBA team. Hill averaged over 20 points and 16 shots per game and for those years was an elite offensive player.

Now, after years of injury and the unstoppable march of time, Hill has transformed his game and according to Gentry, the guy who coached him then and now, is a better defensive player at 38 then he was at 27.

"I think he's a better defender because he uses his intelligence as well as his athletic abilities. I think if you look at both of them, he's probably a better defender now then he was in Detroit," Gentry said.

"He didn't ask me to play defense in Detroit," Hill joked when told about Gentry's assessment. "I could play defense (but) I probably rested more on defense because I had to do more on offense."

Interestingly, Hill sees some of himself in Kevin Durant who has all the tools to be a great defender but right now is being asked to carry so much of the scoring load for his team that he can't focus on it.

Grant still has plenty of athleticism and quickness left in him but at his experience level it's more like the joke about what the old bull said to the young bull, "You have to be efficient and that's what I think I've learned."

Grant Hill isn't a guy who spends hours pouring over film before each match-up. He doesn't have to. Aside from a review of the recent scouting report, Hill has all the information he needs indexed in his head.

"I like to think I can watch a guy play and figure his game out...The guys you worry about are the guys you don't know. The guys that are new," Grant explained about his process.

"It's really all about knowing the tendencies of your opponent. Tyreke Evans, he wants to get in the paint use his strength and his size so he's going to herky-jerky and dance with the ball...A guy like Monta Ellis likes to go right, hard, likes to go left, pull up...Durant, can't give him any space, he likes to go left pulling up."

Suns GM Lance Blanks, who's been around the game a long time himself, talks about what Grant's preparation brings to the floor, "He's at a point, a maturity point in his career, where he knows players extremely well. Knows what their tendencies are and does a great job of defending that or taking that away from guys."

Even so, Grant is always quick to point out that you can defend a guy perfectly and he might still make shots. That's what Kobe Bryant did to Hill and the Suns in last year's Western Conference Finals. Defense might win championships but great offense still beats great defense...and clichés are clichés for a reason.

There's the technical aspects of playing defense and the physical talents such as quickness and size but ultimately it comes down to effort and desire and pride.

"All those things play a role but it's got to be personal. When somebody scores on you, I get pissed off...It's got to hurt a little bit. You got to take pride in it," Hill said and then compared playing defense to rebounding.

"I'm not a great rebounder but I would imagine those that are, it's not sometimes all about technique. Sometimes it's just about pride and heart and I'm just going to fight and compete and do what I have to do to get that ball. I think the same thing defensively, I'm going to make sure my guy doesn't score."

In a league filled with guys with incredible talent who have all worked hard to even reach this level, there's still frustration when the effort isn't there. For a guy like Hill, it seems inconceivable that a player with so much talent wouldn't also work as hard on defense as a guy who's making it in the league on sheer desire.

Ultimately, what makes the special players are the combination of skill and work ethic. It's unfortunate that combination has to be considered "unique" but working hard all the time doesn't come naturally to everyone.

When it comes to proving defense, there just aren't very good statistics out there. What we can do in this case is look at specific anecdotal situations where Grant Hill has been matched up against some of the league's top offensive threats.

The following breakdown and subsequent chart was prepared by Leiland Tanner of Bright Side of the Sun.

Grant Hill has owned Andre Miller ever since Game 2 of last year's Western Conference playoff series against the Trailblazers. It was Alvin Gentry that made the switch and assigned Hill to cover Miller after Miller torched the Suns for 31 points in a Game 1 victory.  Miller quietly faded into the background as Hill's size and length kept him from penetrating as he had in Game 1, he struggled shooting the ball and couldn't find space against the then 37-year-old defender.

This year, the story is the same. In three meetings Grant held Miller to under his season average numbers for a few vital offensive statistics.  In their first two matchups - Grant allowed Miller to only score 10 points in those contests, and limited his FGA's to well under his average mark all while forcing three turnovers from Miller as well in each game.

The Suns have seen the Chicago Bulls and Derrick Rose only one time so far this year.  It was a game where Derrick Rose put up 35 points while being guarded by Grant Hill, but he also played season high 50:19 minutes.

Kevin Durant is the pinnacle and definition of ‘elite scoring' in the NBA and we've seen Grant hold his own twice now this season against him and he dropped 30 points and 11 rebounds on KD's head too.

That was in their first meeting on December 19, 2010 Kevin Durant logged 43 minutes and put in 28 points but on an 8-19 (.421) shooting night where he nailed only 1-6 from three-point range. Playing man-to-man Grant was limiting Durant in his driving options and also did a terrific job denying Durant the ball early in the Thunder's offense all game long.  But when the team switched from a man defense to a zone defense in the 4th quarter, Durant went off for 10 points.

Their second meeting on February 4 was yet another impressive defensive effort by Grant Hill. In this game Durant was 8-16, he did not take as many shots as he usually does and it was because of Hill's ball denial and aggressiveness on defense.

We'll see Hill take on Durant two more times this year and trust me, when you start to look for Grant Hill's defense as you're watching, it's very easy to find.

Monta Ellis is the League's third leading scorer at the moment and three times we've seen Monta play against the Suns this year. In the first meeting, the Suns played predominately a zone defense and Monta Ellis went off for 38 points picking apart the defense and driving to the basket at will. But in the next two meeting it was a very different story.

The second time around Grant was given the assignment to guard Ellis and was extremely effective. Ellis jacked up 17 shots and only hit five, he still ended up scoring 21 points thanks to 13 trips to the line. For the game Ellis shot a very poor 29% from the field and visibly struggled to isolate and drive on Grant. Was it just an off shooting night for Monta?  Maybe, because in Ellis' very next game, a win against the Denver Nuggets he drained a whopping 16-30 (.533) for 37 points and looked unstoppable.

But then what would explain the fact that the Warriors game after that was again against the Phoenix Suns and again it was Grant Hill on Monta Ellis. Ellis finished the game with just eight points on 4-13 (.308).

In the chart below we see details of Hill's key defensive match-ups this season. Only LeBron James got the better Grant. 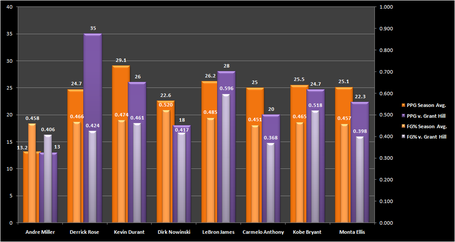 Even more than statistics, video clips can be misleading. It would be just as easy to assembly a bunch of clips of Grant getting scored on but that's not the point of this story, hence these are some (grainy) clips of Grants defense. Watch closely, especially as he moves his feet and uses his length to bother Derrick Rose.

The bottom line with Grant Hill was best expressed by his teammate, Mickael Pietrus, "You've got to love watching Grant play because he has such a great passion for the game. He enjoys every moment he's on the floor...The more longer he plays, the younger he gets."

And we all hope he plays much more longer.

For those real Grant Hill fans, here's the full audio of my sit down interview with him where he talks about all the above plus shares his thoughts on who some of the league's best defenders are and what kinds of players he likes to guard.