Robin Lopez Bounces Back With Eight Extra Inches Of Hop

Share All sharing options for: Robin Lopez Bounces Back With Eight Extra Inches Of Hop

Robin Lopez showed up to the start of the NBA season feeling great. He said he was healthy and had fixed some about his mental approach to the game. We heard about how well he was playing all through training camp and got some early glimpses of his renewed athleticism before the season started. Monday night, however, was the official coming out party.

Lopez scored a team-high 21 points off the bench and grabbed seven rebounds while only committing three fouls in 26 minutes of play. He drew five fouls and recorded 1.5 points per possession on 8-12 shooting making him the most efficient player on the team all while having few plays run for him.

Robin scored several times in the paint on dump off passes by being in the right place and his mid-range shot was falling. He was 3-4 at the rim which demonstrated his activity and finishing ability and 5-8 from outside the paint which showed off the work he's put in on his jump shot.

Asked to explain the Lopez resurgence, Phoenix Suns coach Alvin Gentry for the first time gave details about the decreased athleticism we saw last season which were actively denied by the team in late March.

"I think that's the major part of it. I think that he's healthy now. His vertical leap is, he lost eight inches and he's got about almost all of that back. I just think he's in a much better place than he was and I think mentally he's been really focused on locked in on what we're trying to do," Gentry said.

For his part, Robin is just happy to be playing at the level we saw during that 30-game stretch in 2010 when he started for the Suns and was a significant contributor to the team's success, "It feels good. But more importantly, it feels good to be able to get out there and just get after it and play really hard, play all out."

Lopez, still only 23, has a lot of work to do and plenty of room for growth.

His rebounding can improve as can his pick and roll timing and low post game. But if he continues to play at this level, stays healthy and shows the kind of progression you would expect from a young player, then he will have a long and successful career in the NBA. He might even fulfill Steve Kerr's draft-time prediction that he will be the better Lopez twin. 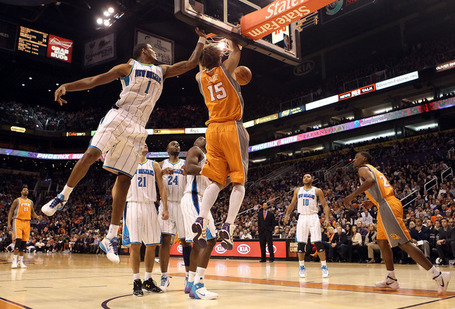 Robin Lopez #15 of the Phoenix Suns slam dunks the ball against the New Orleans Hornets during the season openning NBA game at US Airways Center on December 26, 2011 in Phoenix, Arizona. The Hornets defeated the Suns 85-84.(Photo by Christian Petersen/Getty Images)