AUDIO: NBA Lockout May Soon Be Over, According To Source, But Reports Are Mixed

Share All sharing options for: AUDIO: NBA Lockout May Soon Be Over, According To Source, But Reports Are Mixed

According to ESPN 700, a radio station based out of Salt Lake City, the NBA lockout may finally be over. Dave Checketts, the owner of Real Salt Lake, noted businessman and close friend of NBA commissioner David Stern, has gone on the air and announced the deal is pretty much done. Other sources, however, disagree with him.

Follow below the jump for the tweets, as they are too wide for this space: 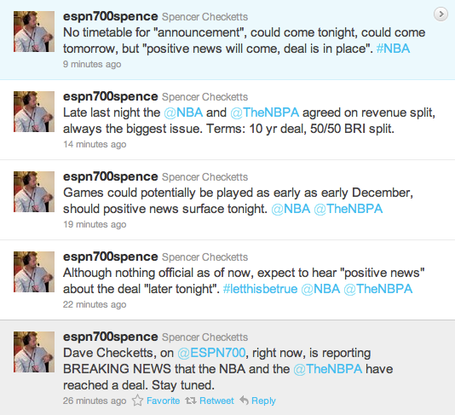 Want to listen to the audio? Check it out here.

What does this mean for the Phoenix Suns? Well, we can be thankful that the Suns, their employees and the fans that adore them will all be happy with this news if it is accurate.

Ken Berger, CBS reporter in New York, has another story to tell, tweeting the following: "Person in the room assures me that no agreement has been reached. They're about to hit the five-hour mark here in New York."

Until the NBA lockout is officially over, don't read too much into these tweets. It is most definitely not over until the dotted line is signed by all parties and the teams can start practicing for the regular season to begin. At least now we can see that both sides are getting close.