An early preview of the Suns season.

Share All sharing options for: Phoenix Suns 2010-11 Season Preview: So Many Questions

Ed Note: This is far sooner than I would prefer to do my preview and prediction post. In fact, I like to wait until right before the season starts. I want to watch the exhibition games, see how rosters shake out, see if any big injuries pop up around the league and basically dawdle and defer until the last possible second.

But as we are participating in the giant Internet-wide NBA preview extravaganza hosted by Celtics Blog, it's just not something that could wait. Just remember that I reserve the right to change anything and everything I am about to write. Consider this early impressions. The format is standardized, as well, so suck it up if you don't like it.

Team Name:
Phoenix Suns
Last Year’s Record:
54-28
Key Losses:
Number one in our hearts, number one in team scoring, number one in thunderous dunks, and number one in exploring his Jewish roots ... No. 1, Amare Stoudemire.
Other losses include:
- Leandro Barbosa was shipped to the frozen tundra of Toronto, which saddened no one.
- Lou Amundson took his (somewhat limited, but highly energetic) talents to Golden State.
- Jarron Collins and Taylor Griffin won't be returning, but only their mothers, wives or girlfriends will notice.
- The front office team of Steve Kerr and David Griffin is gonzo.
Key Additions:
Hedo Turkoglu brings his $40m in contract obligations, along with his love of pizza, the adoration of the Turkish people and a questionable attitude and unique skill set to Phoenix for a do-over after busting out in Toronto.
Other additions include:
- Josh Childress and his chill (via free agency).
- Hakim Warrick and his goatee (via free agency).
- Gani Lawal and his thunder dunks and raw energy (via draft).
- Matt Janning and his white boy Minnesota combo guard charm (via undrafted free agent).
- Dwayne Jones and his rebounding potential and all-around average game (via free agency).
- New diverse front office team of Lon Babby, Lance Blanks and John Treloar (via necessity).

1. What Significant Moves were made during the off-season?

Contrary to rumor and speculation, Robert Sarver did not sell his stake in the team or move the Suns to San Diego. In fact, he might not be selling many mortgages in his banking business, but he certainly spent plenty of basketball money this offseason.
Sarver offered Amare a five-year/$100 million deal that had reasonable minutes goals to make the final two years guaranteed. When Amare turned that down for the fully guaranteed hoopla and chaos of New York, the Suns did what few expected -- they spent some serious coin on restocking the roster with several mid-sized guys with their mid-sized contracts.
Between a new deal for Channing Frye, taking on the remaining obligation to Turkoglu, the new Childress and Warrick contracts and a few other smaller deals, the Suns added over $110 million in new obligations. Add to that a new front office position and a new coaching position and it's pretty clear that money was spent.
The approach -- with all the key decisions made before the new front office was on the job -- was to spread the risk over several mid-sized contracts instead of putting all the eggs in the wrong superstar basket. Sarver feels that the Suns have a lot of flexibility to make moves when and if the next big name guy becomes available and is interested in taking his talents to a place where snow is only seen in the bathrooms of the swanky Scottsdale clubs.
The team thinks they've managed to walk the line between staying relevant, interesting and competitive while also avoiding long-term deals that would tie their hands. We'll see how it pans out, but you can certainly see an impressive set of decisions that at least followed a well-conceived plan.

2. What are the team’s biggest strengths?

Steve Nash
He is still on the team and he's still awesome. His hair is long again and he's satisfying his Jones to diversify into filmmaking, soccer team owning and learning how to spend other people's money Wall Street style.
In other words, he's ready to ball for a couple of great months and then battle through a couple of painful months and then perhaps have just enough left in the tank for the postseason.
Depth and versatility
The Suns will easily go 10 deep and that's not including second-year enigma-forward Earl Clark and impressive rookie Gani Lawal or the potentially talented but possibly overrated Dwayne Jones and Matt Janning.
The Suns top 10 will include a starting five of Nash, Richardson, Hill, Turkoglu and Lopez and a second unit could probably compete with the Timberwolves starters -- Dragic, Childress, Dudley, Warrick and Frye.
The versatility and depth of this roster will have to be used to overcome the loss of Amare's offensive efficiency and (yes) rebounding.
The Suns will be able to mix and match those ten guys into some very impressive defensive alignments -- Lopez, Frye, Hill/Dudley, Childress and Dragic is a pretty darn good unit, for example. Overall, this is the best defensive Suns roster in ages and certainly has the potential to be a top 10 perimeter defensive team.
Or with Turkoglu, Richardson and Nash on the floor together, the same old Suns will be trying to outscore teams faster than they give up points. Variety is the spice of life.
Offensively, the addition of Turkoglu and the development of Dragic will allow Nash to play off the ball more and the additions of Warrick and Childress give the team two fantastic finishers who can help push the tempo and run the break.
The half court offense will miss Amare pick and rolling, but there are a myriad of other options to make up those points. Look for more offensive production from Robin Lopez, both on the pick and roll/pop and in low post isolation and look for Jason Richardson to both post up more and attack from the wing and off screens.
Hakim will have some big games and inconsistently carry the team (kind of like Barbosa used to do) and Childress certainly has the potential to score 15 points on occasion. Every one of the top 10 rotation players has 15 points per game potential on any given night. This team could have seven or eight players who average in double-digit scoring.
The Suns move off the ball extremely well and are a great passing team. There are always ways to get open shots when you do those things.
Magical chemistry
Chemistry, maturity and a good mix of experience and youth will all play a big role, as well, and certainly give the Suns an edge over talented rosters like the Clippers, Kings, Jazz and Hornets and put the Suns on par with the more talented Blazers, Mavericks, Spurs and Thunder as potential candidates to take on the Lakers.

3. What are the team’s biggest weaknesses?

Interior defense and rebounding
The admitted weakness is size at the power forward position and hence, rebounding. This is easy to understand when your two likely starting power forwards are the not-so-powerful Hedo Turkoglu and Hakim Warrick.
The Suns will combat this with above average rebounding potential from all four top wing players: Hill, Dudley, Childress and Richardson and, of course, with Robin Lopez.
Robin only averaged 6.2 rebounds per game as a starter, but he can occupy the other team's best rebounding big and will tip a lot of balls out to his wings.
With Lopez in the starting lineup last season, the Suns were about +4 in rebounding differential, which was around top five in the league. This chart shows the impact Robin had on the Suns' rebounding results last season once he moved into the starting lineup and then after his injury: 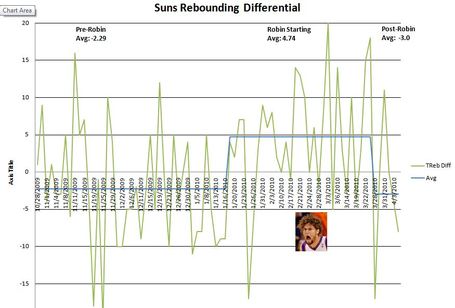 Making it all work together again

The Suns overachieved last season's expectations in large part due to their now famous chemistry. I have little doubt that the quiet professional Hakim Warrik and the personable and somewhat goofy Josh Childress will fit right in.

The big question mark is Hedo Turkoglu.
This is a guy who's used to being adored and perhaps even pampered. He failed miserably in Toronto because he didn't mesh with his team or appreciate his role and now he's coming into this new situation. How Hedo's potentially prickly personality fits in with the Suns is a huge question mark.
Coach Gentry is also going to have a challenge finding enough minutes for all these talented players. Guys want to play and when they don't, they get unhappy. This is another threat to team chemistry, especially if the Suns go through a rough patch.

The bigger concerns are the ages of Steve Nash and Grant Hill and the fragility of Robin Lopez.

The team could actually survive for a short stretch without Nash and for a longer stretch without Hill, although having both healthy would be imperative for any kind of playoff run.
A more likely scenario, and one we've seen the last two years, is Nash dealing with his annual battle with back and shoulder soreness and insisting that he plays through it. There were many nights last season where his presence on the court was not beneficial. We'll see if he's more willing to rest this year, but I'm not holding my breath.
As crazy as it sounds, though, the Suns are better prepared to survive the loss of Nash or Hill than Robin Lopez and there are troubling signs on that frizzy-headed horizon.
Lopez, in his first full season of play, had to recover from a training camp fracture to his foot. Not the kind of fracture you get from falling or what not; this was the kind you get from running and jumping -- aka normal things basketball players do.
The bulging disc in his back kept him out of the final month of the season and first two rounds of the playoffs. This is a scary injury for the young big man and certainly has the potential to haunt him for years to come. A week ago, he said he still wasn't 100 percent.
With no Robin, the Suns move Channing Frye to the starting center position, which means they have no inside presence at all. Third-string center options are the unproven and undersized Dwayne Jones, second round pick Gani Lawal and possibly Garret Siler (if he even makes the team).
To paraphrase Jared Dudley, the Suns need Robin Lopez both healthy and playing at a near All-Star level to get back into the hunt for a chance to play the Lakers again in the Western Conference Finals.
That's asking a lot.

4. What are the goals for this team?

The range of goals for the Suns this season goes anywhere from not losing 40 games to a return trip to the Western Conference Finals. It is almost impossible to predict what the Suns will do this year given the question marks and variables.
If all goes well (really well) and the team catches breaks along the way, they could certainly be right back at the top of the non-Laker heap. That would require other teams suffering big-time injuries -- which played a huge factor last season -- along with everything going right in Phoenix.
On the flip side, it is not inconceivable at all that the Suns are back in the lottery if a couple of teams improve and Carmelo Anthony goes to the Rockets (and Yao stays healthy).
There are just too many unanswered questions going into the season to predict with any degree of confidence that Suns will win 45 games. At the same time, I can easily make the case that they will win 55. That puts the goal somewhere between 40 and 55 wins. That's the best I can do with this team right now.
Be sure to check out the other Suns previews at: Bright Side of the Sun and Valley of the Suns.