Wednesday night's Phoenix Suns game against the Memphis Grizzlies ended in depressing fashion for Arizona sports fans. Channing Frye missed a crucial free throw to ice the game and Grant Hill, of all people, blew a defensive assignment that allowed Rudy Gay to get a wide open look at a game-tying corner three.

But let's not focus on that this morning. There were a lot of positives from the game. The Suns could have easily rolled over and packed it in on the second night of the back-to-back, but instead, we saw a lot of fight and character by the much-maligned bench unit and specifically Hedo Turkoglu and Goran Dragic.

To quote last night's game recap, "in that fourth quarter, the bench defense forced four turnovers leading to seven points, out-rebounded Grizzlies 14-9, and held Memphis to 6-20 shooting after they were hitting 53.3 percent up to that point in the game.

"It was a team effort, but special notice should go to Hedo Turkoglu for his aggressive rebounding against the much bigger Zach Randolph. Randolph finished with 34 points and 17 rebounds for the game, but only had two points and three rebounds in the fourth. The Suns won the quarter 28-14."

There were numerous plays that typified the defensive effort that Goran Dragic credited for the Suns comeback. He's long said that the bench unit needs to play aggressive, pressure-style defense and force turnovers and get easy points in transition off misses. That's what we saw last night and hopefully it will be a reminder for that group of what they are capable of.

The one play we are going to highlight from that run just happens to be the most fun, energy-building, spirit-lifting, defensive play of the game.

It's not something you are going to see often, so we felt it best to memorialize in video.

Also take note of the excellent defense Hedo Turkoglu plays on Gay. Truth be told, it was Hedo staying in front of Rudy that allowed Jared to come over from the weak side and get the block.

We also have little doubt that Dudley was taking revenge for this Rudy Gay chase-down block from the first half. Yes, Rudy did block the ball off the backboard and into the hoop, but still, Jared clearly wanted pay back and he got it. 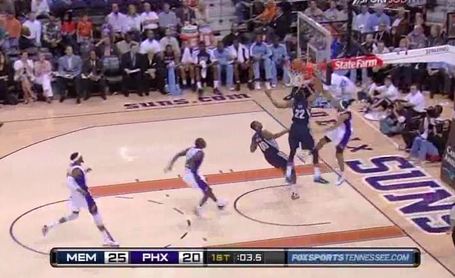