People scoffed when the Grant Hill said the Phoenix Suns wanted to be a "great" defensive team this season. Some scoffed so much they made a bet with me that the Suns wouldn't even finish in the top half in defensive efficiency. And guess what? One quarter of the way through the NBA season and the Suns are dead last in that category. Look who's scoffing now (hint: not me).

The Suns' defensive problems have been identified and mulled over and focused on by the coaching staff and team leaders until the cows went home. The question was, what could the team do about it aside from playing Fantasy GM and trading Earl Clark for Dwight Howard?

The answer, or at least one answer, showed up over the last few games as the Suns used a couple of days on the practice court to install a twist to their regular man-to-man defense that wasn't keeping anyone out of the painted area.

Alvin Gentry has decided to not only sacrifice offense for defense in his rotations by starting the offensively challenged Earl Barron but also go with a defensive trend we are seeing the NBA, employing the strong-side zone defense.

The "strong-side zone" first became popular term when the Lakers started using it -- with a lot of success -- in 2008. The idea is to basically prevent dribble penetration by bringing an extra defender to the same side of the floor as the ball. For a much more detailed explanation of how the scheme works, visit Kevin Pelton at Basketball Prospectus and ask him for the full lecture. Tell him I sent you and you will get a discount.

For the Suns, it's been fairly effective so far in limited action, mostly thanks to the smart and mobile play of Channing Frye, who's proven this season, in the absence of Robin Lopez, to be a much better defender than most people thought.

Because a picture is worth many more words than I feel like typing today, let's look at some examples from Tuesday night's Suns game in Portland.

1)  Here's a classic example of the defensive alignment. The play starts with Camby holding the ball at the top of the arc. The Blazers run a little screen for Roy cutting to the basket, perhaps hoping the Suns might lose track of him, but Dudley and Hill switch the pick and Jared ends up on Roy with Hill following Wes Matthews (I know he hates being called Wes). 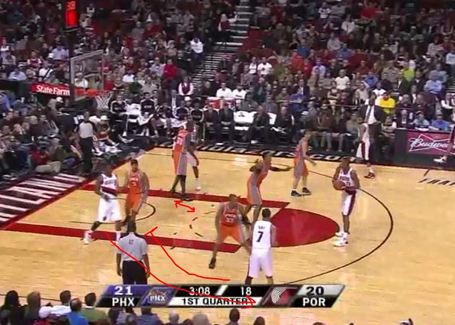 2) Here's where it gets interesting, as Channing Frye comes across the lane and stays between Roy and the basket. Dudley shades Roy baseline, both to prevent middle penetration and to obstruct an easy swing pass to the weak side.

On this play, Roy ends up saying "screw it" and launches a contest shot over Dudley. He made it, but that doesn't matter for this illustration. 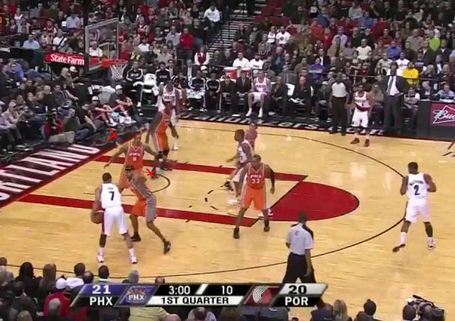 The key to any defense, but especially an overload (or tilt, as it is also called), is communication and rotations off the ball. In this next example, that breaks down.

3) Here you see Frye on the strong (ball) side helping cut off penetration by Patty Mills with Steve Nash again forcing him baseline into the help. Notice, though, LaMarcus Aldridge at the top of the key and Hakim Warrick tangled up with Joel Pryzbilla in the lane. You can also see Frye pointing at Aldridge and in the video, he's clearly indicating that Warrick should rotate over and cover the dangerous shooter. 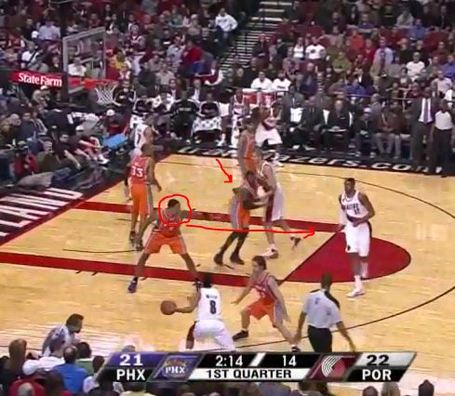 4) Unfortunately, as he's often prone to do, Warrick makes the wrong decision and stays with Joel in the lane. You can see that Grant Hill was there to take over responsibility on Pryz -- they don't call Warrick "Amare-lite" just because he can dunk the ball.

As a result of the blown rotation, LaMarcus is wide open for a shot, which he makes (which, this time, does matter for the sake of the illustration).

What should have happened here is Warrick covers out to Aldridge and then as soon as the ball is swung or, even if Mills just picks up his dribble, Frye can rotate back into the lane and take over Joel and Hill and rotate back out to the weak side wing. There's a lot going on here and you can see why communication and trust are important. Warrick didn't know/trust that Hill would pick up Pryz, so he was afraid to leave him unguarded so close to the rim. 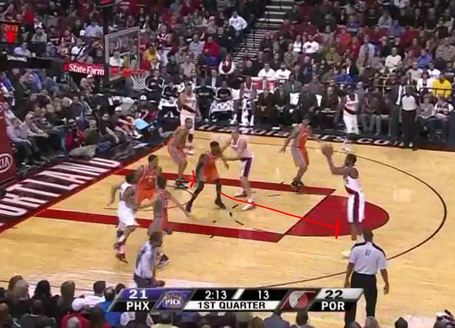 5) Here's another look at it. In this case, the Blazers had already run some other action and ended up with Frye iso'd on Roy at the top of the key. Notice how Roy and one other Blazer are on the ball side of the floor while there are three Suns defenders. Frye does a good job hedging Roy towards his help and Nash and Hill form a wall so all Roy can see is orange jerseys.

Roy ends up skipping the ball to Camby in the mid-post, who misses a contested jump shot with Barron in his face. 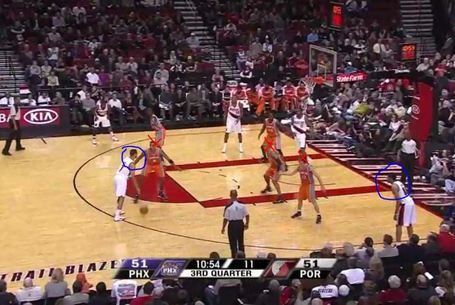 6) This final example is more illustrative of the kind of good defense Frye is playing. He's really the key here and you can see how much the Suns struggle to defend the paint when he's not on the floor.

This play starts with Wes Matthews isolated on Jason Richardson at the high arc. J-Rich is doing a good job pressuring Wes and not giving him space to either shot or even think. He knows that he has help behind him when Matthews puts the ball on the floor.

That help is Frye, who is coming over to cut off the drive just as Matthews puts the ball down. 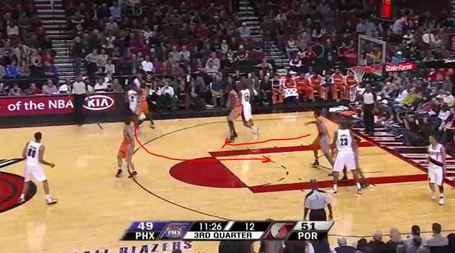 7) J-Rich does a good job staying with Wes and funnels him right towards Frye, who's taking up good position outside the arc to stop the ball. Matthews makes a nice pass to Roy in the far corner.

Roy beats Hill, who's trying to recover out to him and prevent an open three and drives baseline. 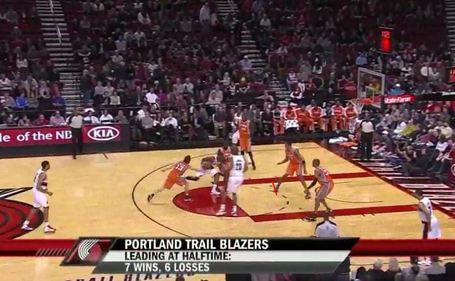 8) But standing in Roy's way is Channing Frye, who quickly rotated over and got set outside the restricted area. If Frye is slow on the rotation, he would surely have had to foul Roy. But he got there in time, stopped, put up his long arms and forced Roy into a tough shot, which he missed. Frye got the rebound to finish the play. 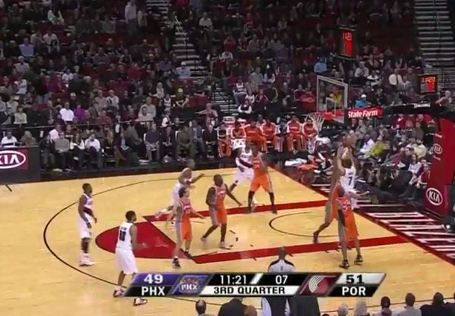 Here's one final example in video form. Pay close attention to both Frye and Barron. See how they move from side to side and cut off the angles of attack for the Blazers guards? The Blazers were forced out of their primary options and had to rely on Marcus Camby creating for himself. Nice, huh?

The play does end with Camby hitting a crazy runner in the lane, but that's not a shot he's going to make very often, so again, a good defensive possession even though the Blazers scored.

The point of all of this is that the Suns don't have to be the worst defensive team in the league and they are working on getting better. They may not be "great," as Grant Hill said before the season started, but they should be able to reach mediocrity in a few more weeks.

Individually, Frye and now Barron are doing a good job inside, while Warrick and Childress are still struggling with the concepts and rotations. Robin Lopez' return will help, as well, but that's going to take a few weeks to see results and depends a lot on how much of explosiveness and quickness Robin can regain.

The Suns have four days off after this Friday's rematch with the Blazers at home. They will surly use that time to continue to work on their schemes.