Mayor Stanton Suits Up With The Mercury, Leaves With Battle Scar

Share All sharing options for: Mayor Stanton Suits Up With The Mercury, Leaves With Battle Scar

In another edition of "everyone thinks they can ball" Phoenix Mayor Greg Stanton stepped on to the Mercury practice court and the results were, well, not surprising. The Mayor had been hyping up his shooting ability as DeWanna Bonner-esq and was going to hold his own on the court with the hometown team in a friendly 5-on-5 game.

The game was all fun and games as the Mayor left with two things. One was an enormous amount of respect for Mercury players. "As a basketball fan and player, I have great respect for our hometown team," stated Stanton after the practice.

He gained some respect, but he left with the battle scars of someone who earned the respect of the players as well.

During the game Mayor Stanton lunged into the crowd for a loose ball and came back with a broken nose. It was all in the nature of basketball, after all he did call himself a basketball player and was lobbying for this game for quiet some time. 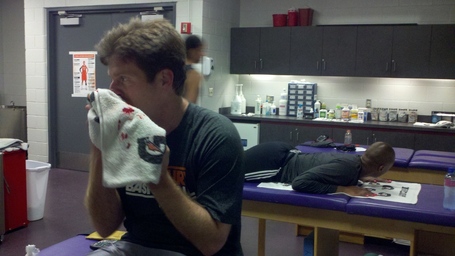 The pictures are a little graphic, but he took the injury in stride and is doing well now. How long until the next time he openly challenges the local team to get on the court? 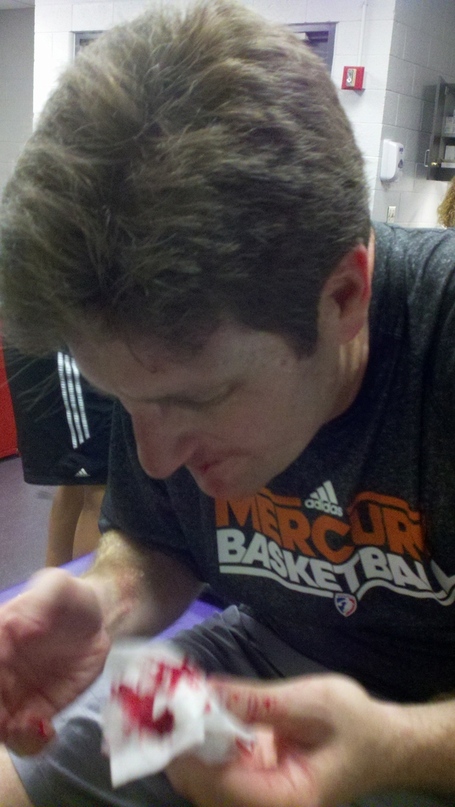 "Playing with the Phoenix Mercury was an incredible experience despite receiving a broken nose," said Stanton after the injury. "These kinds of injuries are just part of the game - they're battle wounds."

You can see Nakia Sanford immediately know what happened after that rebound. She laid on the ground hands over face as to say, "yup, I got him good didn't I?" Sanford is the one Mercury player you do not want to tangle with under the basket too. She is a tough bruising center that gets paid to do that for a living.

You can see Nakia and the rest of the Mercury when the hit the court to continue the season on August 19th at Seattle. Mayor Stanton endorses this message, "I can't wait to watch the first game (at home) of the Mercury back in action on Aug. 19."

See you there too.