The Phoenix Mercury shocked the sporting world on Monday night with a come from behind win over the Seattle Storm. The Mercury turned the ball over nine times in the first quarter which put them in an 18-point hole early in the second period.

But head coach Corey Gaines had a few tricks up his coat sleeve and while he might have preferred to save them for later in the game, he knew that facing elimination from the playoffs he couldn't wait any longer. Gaines went with his big line up that also put his five best players on the floor with Diana Taurasi and Penny Taylor in the back court and DeWanna Bonner, Candice Dupree and Nakia Sanford up front.

Instead of just going for an offensive punch and bringing in an extra shooter, Gaines went for defense and employed the zone defense. Unlike years past, however, he went with a traditional 2-3 zone instead of the rover zone with Taurasi playing free safety.

The Mercury didn't use flashy offense to go on an offensive burst to get back in the game quickly. In fact they only shot 3-18 from three and had just 12 fast break points. They got back in the game with defense.

In the second and third quarters the Mercury held the Storm to 13-35 shooting (37%) and outscored Seattle 45 to 37 and the game was within five points headed into the fourth quarter. It was the kind of grind it out comeback we're not used to seeing from the run-and-gun Mercury.

In the fourth quarter it came down to health. Gaines explained:

"The first time we played Seattle up here I think they were waiting for us for six days. And then we knew they had to fly down and play us, and we both flew back at the same time so it was to our advantage. The game alone would wear them down and we kept on pushing, kept on pushing. They were kind of tired at the end."

Proving Gaines point, the Storm went 1-6 from the free throw line in the fourth quarter while the Mercury went 6-6.

Offensively, the Mercury seemed to go away from their fast break sets that the Storm defend so well and didn't try and run the complex ball movement or pick and roll plays either. Instead it was a lot of isolation with players taking quick shots as soon as they could get any kind of clean look.

DeWanna Bonner typified that mentality with an unusual aggressiveness creating her own shot from the perimeter. She only went 1-13 for seven points but she got to the line (4-4) and helped set the fearless tone.

The offensive efficiency came from smooth Candice Dupree who mostly scored in isolation and went 10-15 for 20 points. Taylor added 19 points (6-11) and an incredible 17 rebounds while Taurasi also dropped 19 (6-16) before fouling out with six-plus minutes left in a tie game.

From there, Gaines told Taylor to take over and shoot as often as possible. Nate from Swish Appeal explained just how great Taylor was in this game:

Shock and Awe - Swish Appeal
I am in awe of Penny Taylor's basketball ability. I think I've made that point clear before and reiterated it after the Mercury's win in Game 2, but last night's performance was an almost perfect example of why I think Taylor is among the most underappreciated players in the league.

In the 2010 WNBA Western Conference Finals the Mercury got swept by the Storm. They admitted later they were worn down and Taylor could barely lift her arm due to a shoulder injury.

This time around it was the Storm who had to rely heavily on veteran guards Sue Bird and Katie Smith to carry the load while Lauren Jackson was out for a good chunk of the season after hip surgery to repair a torn labrum. Gaines also likely sacrificed some regular season games to make sure he didn't overuse his star players.

Taurasi ranked 19th in the WNBA in total minutes (and still lead the league in scoring) while Taylor was held out of several games late in the year to make sure she was ready for the post season.

Jackson had been back eight games but clearly wasn't up to MVP form. Her shot was still true but her mobility was limited, especially on the defensive end of the floor. The Mercury attacked her with Dupree and in the screen and roll game and the former defensive stalwart simply couldn't respond.

Having center Nakia Sanford back for Games 2 and 3 of this series after missing Game 1 with a knee injury was huge. Sanford provided toughness and inside defense against Jackson. Here return to the court was key to Phoenix winning the series.

If you missed this game (I did), you can catch it online at ESPN 3. At least treat yourself to the fourth quarter. It's worth it.

The Mercury will face the Minnesota Lynx who has home court advantage for the series. Game 1 will be Thursday at 7:00 p.m. in Minnesota; Game 2, Sunday at 2:00 p.m in Phoenix (at USAC) and Game 3 back in Minnesota, time TBD.

The Mercury's toughest possible opponent in the playoffs based on two years of history and the match ups was Seattle. Phoenix matches up much better with the less-talented Silver Spurs or the young, fast Minnesota Lynx led by rookie Maya Moore.

More links and photo gallery from Game 3 win over Seattle: 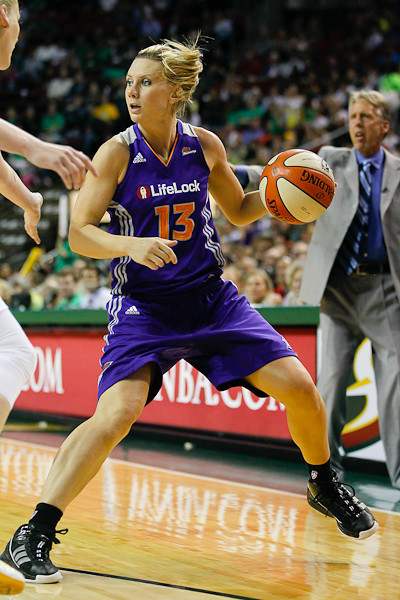