Share All sharing options for: Candice Dupree Named Player of the Week For WNBA Western Conference

It's not a small accomplishment for Candice Dupree to win the Player of the Week award for the WNBA Western Conference. Dupree is beat out the likes of Lauren Jackson, Sue Bird, Becky Hammon, Maya Moore, Seimone Augustus, Candace Parker and teammates Diana Taurasi and Penny Taylor.

Here's Candice after her 21 point, 18 rebound performance against Indiana on Sunday. 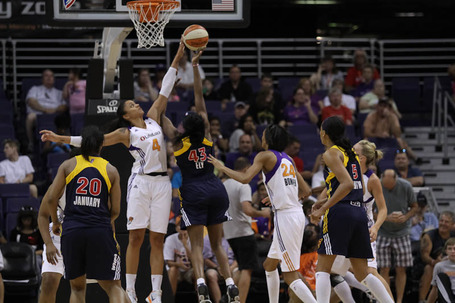 Candice Dupree with a block during Sunday's Mercury win over the Indiana Fever. Photo by Ryan Malone, SB Nation Arizona

On the week, Dupree led the league with 15.0 rebounds per game. She also recorded her third consecutive double-double, the longest such streak of her career, which ties for third in the WNBA this season. Among Western Conference players, she ranked second in blocks (2.0 bpg) and sixth in scoring (19.5 ppg).

Her week was highlighted by setting a franchise record with 18 rebounds and scoring 21 points in a 93-89 victory over the Indiana Fever on June 19. It was the second 20-15 performance of her career, both coming with the Mercury. Dupree also scored 18 points and registered 12 rebounds, along with a block on June 17 against San Antonio.

The Mercury begins a four-game road trip against San Antonio on Tuesday, June 21. The game will be telecast live on ESPN2 at 7 p.m. The team returns home to face the Chicago Sky on July 1 at 7 p.m. Tickets starting as low as $10 in the lower level are still available. Tickets can be purchased online at phoenixmercury.com, by phone at 602-252-WNBA, at the US Airways Center ticket office and at all Ticketmaster outlets.